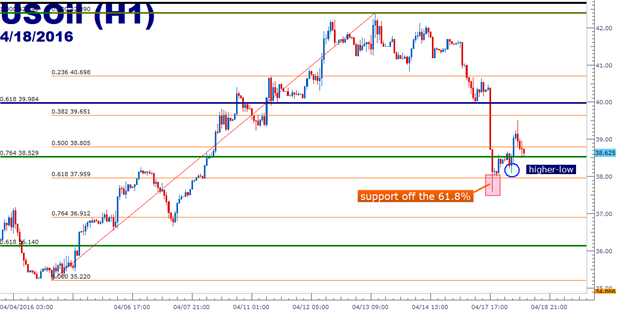 - The big mover on the day is Oil after talks in Doha failed to produce a production freeze. While this does little to change short-term fundamentals, the inability of producers to strike a deal could potentially bring back the down-trend in Oil prices. We go over an approach below that traders can use to get short if price action continues to fall.

- Trading reversals is tricky and could be a really costly endeavor, so the approach we go over below uses a conditional setup to wait for confirmation before looking to go short; but cogent risk management still needs to be used.

This weekend was circled on Oil trader’s calendars since mid-February, as it marked the first coordinated meeting between OPEC and non-OPEC oil producers in over 15 years. The wide hope was that an agreement would be reached on an oil production freeze that could dampen future supplies and, in turn, tilt prices higher. The simple news of this meeting had helped Oil recover with Brent Crude up by more than 45% since news of this meeting first began to circulate.

But as has become commonplace around the discussion of Oil prices, nationalistic interests have presented complications that make a coordinated freeze or production cap appear to be a distant possibility. On the eve of this Sunday’s meeting, Iran announced that they would not be attending. Shortly after that Saudi Arabia announced that no deal would be struck without all OPEC members signing on; which pretty much nullified the meeting as no deal would be possible under those circumstances.

Oil prices were promptly slammed on this news, dropping by as much as -6.9% in the two hours after trading opened for the week; at which point, Oil caught support on the 61.8% Fibonacci retracement of the most recent major move (shown in orange on the below chart), and has begun to claw higher.

The big question here are the longer-term ramifications: While news of no deal being struck is unlikely to change the short-term fundamental picture around Oil or supply/demand in the commodity, the fact that Oil producers have again been unable to come up with a deal to support prices is bearish for sentiment, and could potentially bring back the down-trending themes in Oil prices. Taking a look at the longer-term chart (daily), we can see that prices are still clinging on to previously-established support structure. Below, on the daily chart we can see how the 76.4% retracement of the ‘secondary move’ in Oil, taking the February low to the April 13th high (shown in Green on the below chart). 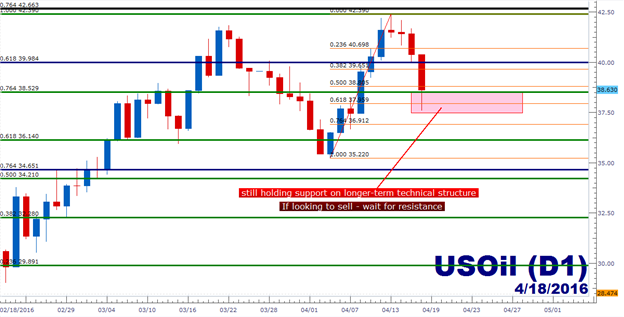 For traders that do want to look to get short in Oil, near-term support structure can be used to define approach. As of this writing we’re seeing support at 38.52, but should price action fall below this level, then traders can begin looking for lower prices. A little deeper on the chart, we have potential support at 37.95, which is the 61.8% retracement of the most recent move, and this would likely be a more proactive level for those looking to get short.

We go over the approach on the chart below. Traders can wait for lower prices to break support to prove that sellers might be able to continue pushing prices; if support doesn’t get broken then no short position is entertained. But if that support becomes broken, traders can look to sell resistance by waiting for a price action trigger (a reversal wick) at or around resistance (which can often show up around old support levels in a fresh downtrend). 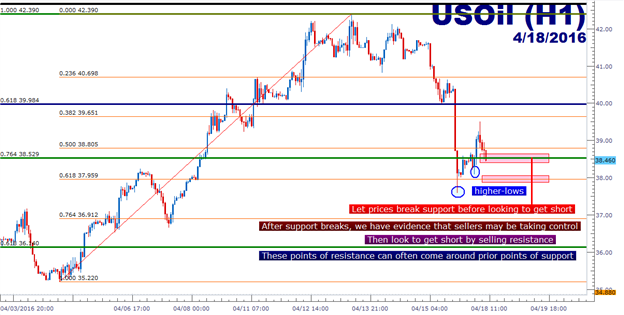