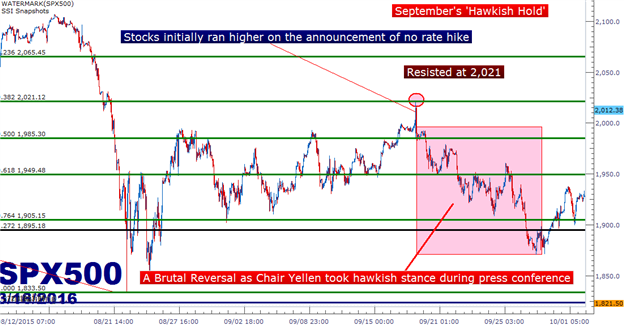 The Fed's Dots Will Set the Tone, Will Pandemonium Ensue?

- The Federal Reserve meeting at 2PM ET and accompanying press conference at 2:30 PM ET will likely dominate market interests today. This is a big event, with the big question being whether the Fed will take on a more dovish stance towards rate hikes this year and next.

- The last time that the Fed tried a ‘hawkish hold’ in September, pandemonium came back to markets very quickly. And as we saw in December, the Fed’s dot plot matrix and rate hike expectations will likely take on more importance than any rate decision made today.

- Markets are likely going to remain extremely volatile throughout the announcement and press conference. Please make sure risk management has been addressed if you’re looking to traverse these conditions. And if you’re looking for trade ideas, check out our Free Trading Guides or our Speculative Sentiment Index indicator.

Few are actually expecting a hike today with odds at less than 10%. The wide-spread expectation is that we’ll get a hat tip towards June for the next rate hike; but perhaps more important will be the Fed’s forward guidance. The most recent forward guidance from the Fed’s December meeting indicated that the bank is looking at four rate hikes this year. A hold today could make that projection difficult to institute, as outlined by my colleague Christopher Vecchio in his morning piece.

The expectation for today is very similar to what happened at the September Fed meeting, in which the Fed took a ‘hawkish hold’ stance; as in, they held rates but warned that rate hikes were coming while also providing a hawkish rate forecast for the future. The market reaction was rather brutal, as outlined below:

September’s ‘Hawkish Hold’ Was Not Good For Stocks

What ultimately brought risk assets back to life?

The two weeks after that hawkish hold were frightening for markets because it appeared as though there were few sources of strength. Markets were still on edge from the August swoon that had enveloped Chinese equities, and the continued sell-off in commodities had created considerable discomfort around-the-world, particularly in emerging markets. This flurry of events made a rate hike out of the Fed look very unlikely, and multiple Fed members suggested as such in numerous interviews and commentaries. The thought that the increasing rate of global pressure would be enough to cause the Fed to suspend their rate hike plans finally provided that sense of support that investors were looking for.

Within in a couple of weeks, markets had moved back to the ‘bad is good’ state, meaning the worse that data printed, the higher the probability of more Central Bank support, leading to higher stock prices. Or, to put it another way, the more signs of turbulence ahead, the stronger the motivation for investors to take on risk. This can be a pretty dangerous concept in matters of risk management…

Within a couple of weeks of that support being found in stock markets around the world and equities were moving back towards all-time highs. Order appeared restored, at least temporarily, and as we neared the December Fed meeting, the stars were finally aligned for that first rate hike out of the Fed in over 8 years. But we didn’t just get a rate hike – we got the rate hike along with the guidance for four more hikes in 2016. It appeared that the bank tried to temper this impact by decreasing guidance for 2017 and 2018, but markets appeared to be more concerned with the more-immediate. This appeared to be the linchpin that really roiled markets as stocks began selling-off again shortly thereafter. 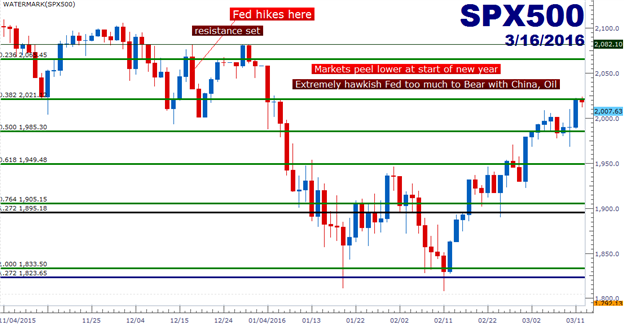 The post-December Fed sell-offs continued well into the New Year, and the risk aversion continued until the morning of February 11th. This was the second day of Ms. Janet Yellen’s Congressional Testimony. On the first day, Ms. Yellen had mentioned that the Fed wasn’t even sure that negative rates in the United States were possible due to legal reasons, and markets continued their downward descent. But on the second day she said that the Fed would not take the option of negative rates off the table, giving the appearance that the Fed is, in fact, open to the prospect of more ‘loose’ monetary policy. This apparently was the life-line that equity markets were looking for as stocks began a massive rally that’s seen an 11% pop in a little over a month. 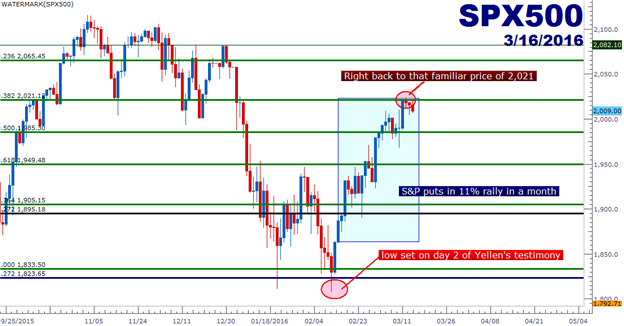 Today’s meeting is the first for the bank since that Congressional testimony, and this is the first opportunity that the Fed has to provide updated guidance. The guidance will likely be the market mover today, similar to what we’ve seen from recent FOMC events. If the bank sticks to their current projections with the median expectation of four hikes this year, markets can move back into a risk-aversion mode fairly quickly. This is also the case if the Fed retains a hawkish stance during the press conference regarding the need for additional rate hikes later in the year to counter potential inflationary pressures.

Right now there is massive divergence in rate expectations between markets and the Fed. If the Fed guides those expectations closer to what markets are looking for, around two rate hikes this year, we can see risk assets continue higher while the bank retains a slightly-hawkish stance towards the remainder of the year. But if we do get a mixed message with a hawkish overtone, similar to what happened last September, do not be surprised to see risk aversion come roaring back.

But if the Fed is able to successfully assuage investors’ fears while guiding those expectations lower, even if talking up a hike in June, we can see risk trends continue in their upward trajectory.