USD Awaits the Next Iteration in the Fed Feedback Loop

- There is quite a bit of data circulating through markets, but one event stands above the rest as a differentiator for global markets: Tomorrow’s FOMC announcement and press conference.

- Risk trends have very much been shaped by the Fed’s stance of recent. Should the Fed talk up normalization and rate hikes in the remainder of the year, risk aversion could find its way back to markets very quickly.

- Markets are expected to remain volatile. Make sure your risk management is on point, and if you’re looking for trade ideas, check out our Trading Guides or our Speculative Sentiment Index for shorter-term ideas.

The global risk rally that began on the morning of Chair Yellen’s Congressional testimony has chalked up over a month’s worth of extremely bullish price action, and in that time we’ve basically watched the economic world go from ‘uh oh’ to ‘hooray.’ The source of this re-fired optimism was the same source of strength that markets have become accustomed to since the Financial Collapse: Central Bank support.

If we go back a month to Ms. Yellen’s testimony, markets were in a far more precarious position than they are today. Risk aversion had kicked back up after a violent start to the year, and the convergence of themes in Commodity markets, China and a tighter monetary environment out of the United States were all too much for markets to concurrently bear. That morning, Ms. Yellen assuaged one of those fears as she displayed a very dovish tone that equity markets apparently took a liking to, and many global indices began to rally simultaneously. That morning also saw rate hikes for the United States get completely priced out of the market for the remainder of 2016 on the convergence of those earlier mentioned fears. This allowed stocks to rally: 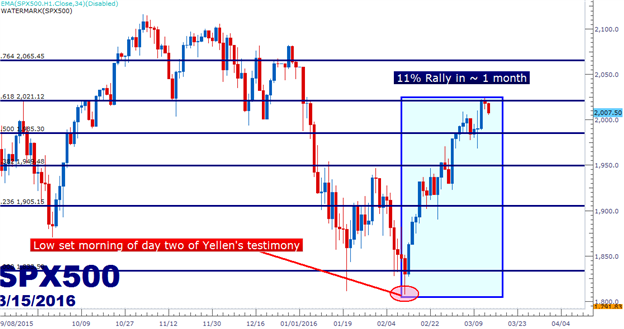 An 11% rally has a tendency to change things… and considering that there is around $7.8 Trillion indexed to the S&P 500 around-the-world, we’re talking about an estimated $858 Billion in new-found value.

Usually moves of this nature are driven by something positive, like earnings growth or new economic policies. And usually gains like this take time, as in an 11% tally would be handsome even for an annual return given historical precedence. But for 11% of value to find its way into a major index in just over a month may be indicating something else.

At the very least, it would appear that markets and the past six weeks of price action have centered in on the source of their scourge: Rate hikes out of the Fed. We discussed this at the end of last year in the article series, Top Three Themes as We Approach 2016. Part One looked at Asia, Part Two looked at Commodities, and Part Three was US Rate Policy.

Higher rates out of the United States are the differentiator of the current situation. In the eight years since the Financial Collapse, a lot of negative economic events have taken place, but the fact that Central Banks around the world are on emergency-like policy measures have been enough to offset each of those sources of weakness. But monetary policy, by design, doesn’t promote growth in an economy. It’s designed to have a short half-life, less than a year: It’s fiscal policy that can provide structural changes, and it appears that we’ve entered a period where most fiscal policy makers are looking at Central Bankers for continued help.

Central Banks are starting to take notice of this fact, and one of the clues to the recent differentiation was the rate hike from the Fed in December. At the time, the same risks facing the market today were present: Commodities had been selling off for much of the year and China was still facing significant pressure. The Fed backed off of hiking in September after the initial increase in tumult because of this pressure, but warned that rate hikes were coming and markets continued to sell-off. This was the ‘hawkish hold’ from the Fed, and was largely considered a failure because just a few weeks later Fed members were talking up the prospect of ‘looser for longer,’ i.e. no rate hikes in 2015.

But once the Fed gave markets that calm sense of confidence, stocks began to rally again. From the end of September to the beginning of November, the S&P put in a very similar 13% rally on the back of the prospect of ‘looser for longer.’ On the chart below, we look at the similarity of this most recent risk rally when compared to last October. 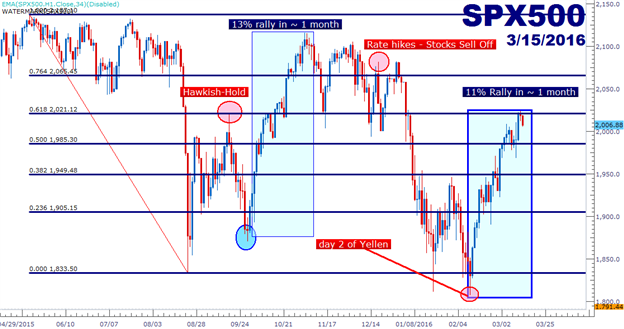 The above relationship has been referred to as the ‘feedback loop.’ When stock prices go down, the Fed has had a tendency to take a dovish approach, and this is about the time that you’ll see Fed members on television doing interviews, discussing the prospect of even more loose monetary policy. But then when stock prices go back up, the Fed starts looking at rate hikes again.