- More negative Chinese data printed over the weekend, further bringing to question the 6.5% growth targets that the country is clinging on to. But statements from regulators continue to bring on support. But while the world is waiting for Chinese stocks to crater again, another bubble has begun to form in real estate prices in Tier 1 cities.

- This is a heavy week of Central Bank announcements: The Bank of Japan is tonight, the Federal Reserve on Wednesday, and the Swiss National Bank on Thursday are the highlights.

More bad Chinese data: On Saturday, Industrial production numbers for China printed at a 5.4% increase in Jan/Feb from a year prior; the weakest such reading since the Financial Collapse in 2009. Retail sales also slowed, adding a negative mark to the segment of the economy that many have been hoping would aid a stronger Chinese recovery: The development of the Chinese consumer.

But despite these negative prints, Chinese stocks traded significantly higher last night, popping by +1.75% in Shanghai and +3.56% on the tech and small-cap heavy Shenzhen Composite. But this likely wasn’t a direct result of those gnarly prints, and probably had more to do with comments from Chinese regulators that came out over the weekend:

The newly-installed head of China Securities Regulatory Commission gave numerous comments, all designed to add support to the economy and equity market’s continued recovery. The big one, and pertinent for markets the world-around was that he said it was too early to begin to consider the removal of the Chinese recue fund from equity markets. The state rescue fund is ‘China Securities Finance Corp,’ and at one point last quarter it was alleged that they already owned up to 6% of the mainland equity market.

Liu Shiyu, chairman of the CSRC, said that authorities would step in decisively if needed to curb panic-prone markets. And this isn’t necessarily new, CSFC (China Securities Finance Corp) has been in markets for the entirety of the recent volatility, and still over $5 Trillion in value has been erased from mainland equities since last summer’s swoon. But this does mean that traders will have to contend with the constant threat of having a Central Bank on the other side of the trade; so even if you wanted to get short and had the setup to do so, you might want to think long and hard considering that any broad-based declines may be countered with a massive move on the bid from a government-sponsored player.

At the very least, this threat has been enough to curb participation in equities trading in China. Volumes in equities trading in China have dwindled back down to 2014 levels as margin trading has diminished significantly. Capital flows, instead, appear to be directed back into real estate; particularly Tier 1 cities like Shenzhen and Beijing. Just two weeks ago, it was reported that property prices in Shenzhen had surged by 50% in a single year. Authorities are already trying to address this problem, but it would appear as though regulators have found another potential risk in the Chinese economy that’s going to need to be managed.

For now, Chinese stocks are holding support levels set in February and are continuing the somewhat tepid-bounce that came in around Ms. Yellen’s congressional testimony. On the chart below, we’re looking at the monthly setup in the Hang Seng (HKG33), representing stocks out of Hong Kong. Notice that the support that’s come in during January and February are at the 61.8% retracement of the Financial Collapse move. 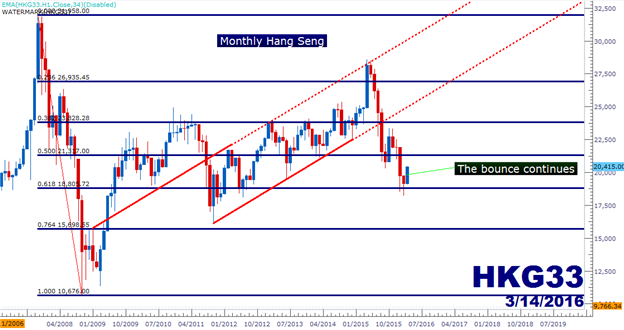 Will the risk recoveries continue? Central Banks will lead the way…

This is a huge week on the macro front as we hear from numerous Central Banks. And after last week’s salvo from the ECB, it reasons to believe that we’ll see considerable volatility across markets as liquidity will likely remain low. We previewed this CB-heavy week just a week ago in the article, Prepare to Usher in Another Way of Central Bank Volatility.

Later tonight we hear from the Bank of Japan. The last BoJ meeting didn’t work out too well for them after the surprise shift to negative rates. In the plan designed to inspire Yen weakness, traders actually priced in Yen strength. So, this move kind of backfired on the BoJ. The big question is whether the bank will have the ammunition to do another round of QE. They already own a considerable portion of their own bond market, and their move to buy stocks with QE hadn’t worked out too well.

Most analysts aren’t expecting any significant announcements tonight, but the real news could be in the details, and whether or not Tokyo signal that another round via extension or increase to QE may be coming.

Japanese stocks are still in a rather precarious position despite four consecutive weeks of gains. The lows came in right before Ms. Yellen began day two of her testimony, alongside with most other risk assets and equity markets.

If the Bank of Japan does signal the potential for an increase or extension to their QE program, fully expect the Nikkei to break above these levels of resistance on the venture to new highs.

But should they take a passive, ‘wait and see’ approach, look for markets to price-down the Nikkei under the fear that Tokyo may be running out of ammunition or, at the very least, beginning to feel the strains of 3+ years of QE that have yet to show much for tangible results inside of the real economy.