USD Ready to Run, SPX Lay in Wait for Yellen

- The news front over the next two days will likely be dominated by Ms. Yellen’s twice-annual testimony in front of Congress. Today she speaks with the House of Representatives, and tomorrow the Senate.

- Ms. Yellen’s already provided her prepared remarks (summarized below the first chart), and at 10 am ET, she will read that to Congress. After that, she will take questions, and this is where the volatility may get interesting.

- The US Dollar is at the same pennant support that we mentioned last week after catching a bounce on Thursday and Friday. USD can put in some major moves on the back of this testimony, as the recent bout of USD weakness has been driven by decreased rate hike expectations. If Ms. Yellen counters this by taking a hawkish tone, watch for USD strength.

There is one really big news item on the calendar for the next two days: Janet Yellen’s twice-annual monetary report in front of Congress. Today begins with the House Financial Services Committee, and tomorrow Ms. Yellen will be speaking in front of the Senate Banking Committee.

Like most Fed events, this will begin with prepared remarks from Ms. Yellen (discussed below the first chart) and this is where the market will get the Fed’s take on the current state of the US economy. After that, she’s open for questions and this is where events can get really interesting as members of Congress can basically ask her whatever they want and she’s in a position where she will probably respond. This is quite a bit different than normal Fed meetings with press conferences led by reporter questions. Congressmen (and Congresswomen) represent voters, and with hot-button issues like the economy, we’ll often see vociferous news-worthy types of loaded questions directed towards Ms. Yellen that, frankly, can be hard for anyone to answer. Any stumbles are caught on tape and replayed and replayed.

There is one gigantic question on investors’ minds, and fully expect this to be the object of focus throughout this two-day testimony; and that is how aggressively the Fed is looking to raise interest rates.

There is a gigantic disconnect right now between market expectations and the perception of Fed expectations. In the most recent dot plot matrix, the Fed indicated that they may be looking at four rate hikes throughout 2016. Markets never really bought that, and at the beginning of the year we were looking at 2 hikes expected by markets, and by now that’s all the way down to zero with the expectation for that next hike all the way out to 2017. So there has been a growing disconnect between these two numbers and given the state of the global economy with some very legitimate concerns in Asia combined with continued challenges for commodity prices, the Fed’s continued hawkishness has become somewhat of a concern.

But as we’ve gotten more and more indications of softness in data out of the US, combined with the plethora of peripheral issues developing around the economic world, investors have priced out those rate hike expectations from the Fed. This is somewhat of the expectation that the Fed will continue doing what they’ve been doing over the past five years, which is basically bending monetary policy in response to stock prices. This could explain the late-session ramps that we’ve seen in US stocks over the past two days, and the US Dollar has just moved back down to support in the bull pennant that we identified last week.

Ms. Yellen provided another balanced statement, although she did avoid the question of a rate hike in March. Ms. Yellen talked up employment as a strong point while also saying that the bank expects inflation to remain subdued because of further declines in energy prices.

She also mentioned that conditions in the US have become less conducive for growth citing equity market declines, credit bifurcation (higher rates for less credit worthy borrowers, less impact for more credit worthy) and further appreciation of the US Dollar.

This is somewhat of a similar hat tip provided by Mr. Dudley last week, in which he mentioned the threat of a strong US Dollar potentially pulling the US Economy into recession. We discussed this concept in the article; The Real Bain of Equity Markets is a US Dollar problem.

Basically, in a world where most Central Banks are trying to deflect capital flows, being the one major Central Bank looking at a rising rate regime will attract considerable capital flows. Those capital flows mean more demand for US Dollars, which means trouble for American exporters. That stronger dollar makes American production less competitive, both internationally and in the US. So, even if the US is recovering and doing well, if the rest of the world is weakening their currency, well, eventually, that strength in the Dollar will probably pull the US into recession along with the rest of the world.

On the other hand, there is a very legitimate need for higher interest rates for pension funds, retirees and near-retirees. The initial market response to negative rates in Japan hasn’t been very positive, as the Nikkei spiked down to another new low last night. 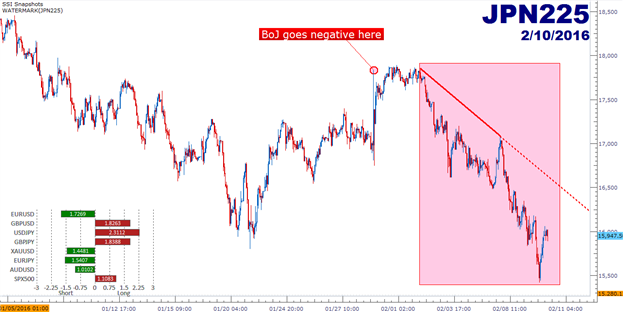 The Volatility Will Likely Start Just After 10:00 AM

This is when Ms. Yellen begins speaking in front of Congress. She’ll start off by reading the testimony that’s already been released that I’ve summarized above. After that, she’s open for questions. There isn’t much that she can really say here that’s out of band with the testimony. She can’t tell the future, hopefully Congress knows that.

The market response to the next two days’ worth of questions will be telling. It’s not likely that she’s going to commit to rate hikes in front of Congress on national television, and it’s also unlikely that she’s going to back down. For that we’re probably going to have to wait until March (next Fed meeting with a press conference). But she will likely try to hedge her statements to keep flexibility on the Fed’s side.

As for trading this – these events can be tough. Volatility can pick up throughout the event, and moves can reverse really quickly if one misstep or misstatement is perceived by markets. This is like trading news for any other major announcement, only this one can last for a couple of hours over the course of a two days.

There are two primary ways that traders can attempt to counter this: 1) Longer-term horizon. Go out to a longer time frame, use a wider stop and a smaller position size so as not to take on too much risk on any one ‘idea.’ 2) Use tighter stops on shorter-term momentum-based approaches. This one can be tough because if no smooth trends develop, the scalper can end up getting whipped around in such an environment.

As for longer-term setups; we discussed the S&P last week as it was trending higher in a bear-flag formation. Since then the bear flag has been broken to the down-side, catching support at 1,827. But, in anticipation of this morning’s event, we’ve seen some pullback in the S&P that’s brought price action up to a potentially new lower-high, and this resistance has come in at the 76.4% retracement level of the most recent major move (taking the 2,082 high to the low at 1,810). The last four-hour bar setup as a Doji, which makes for a bearish harami pattern. But perhaps more enticing – if this current 4-hour bar closes below 1,857, we’ll have an evening star pattern: This can be a really attractive bearish reversal pattern in what’s been a strong down-trending market. That can be a compelling longer-term setup that can offer an attractive risk-reward. 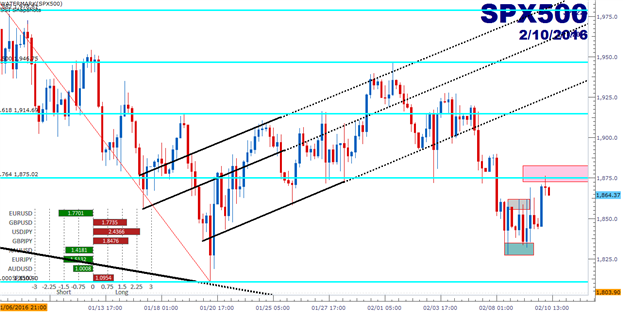