Italian Banks are Screaming Warning Signs to the EU

- Five of Eight of Italy’s major banks have moved ‘limit-down’ this morning, meaning they went do so much that further losses were halted for the remainder of the day. This is similar to the Chinese circuit breakers at the beginning of the year, and in those cases the halts only seemed to exacerbate the problem, giving a warning sign to investors that panic is increasing.

- This has been a developing problem for some time and Italy never really recovered from the Financial Collapse. The banking sector has remained vulnerable as an insurmountable amount of non-performing loans are on the books of Italian banks. These banks have been reticent to sell that distressed debt to investors because they were unwilling to accept lower prices. This week, the Italian government guaranteed that debt and got the ‘ok’ from the ECB, and this raises questions around direct state-aid in the European Union.

Italian banks are getting crushed: The banking sector in Italy has been facing pressure for some time now, but as risk aversion has increased with the turn of the New Year these fears have come under greater focus, and the result hasn’t been positive. As of right now, 5 of Italy’s 8 major banks have went limit-down on the day. And as we saw a few weeks ago in China, a market curbing for a day doesn’t necessarily stop the selling, and in some cases can even make it worse as the fact that the market was essentially closed because it was too weak simply sends a warning signal throughout the economy to investors that ‘panic’ may be imminent.

The worrying part about this is that the Italian economy never really recovered from the Financial Collapse, and the banking sector was at the heart of those fears. Those fears appear as though they’re in the process of being realized right now. On the below chart, we’re looking at the ITA40 ETF, which tracks the MIB (Milano Italia Borsa) Index). Notice that the respite that came from Mr. Draghi’s ‘whatever it takes’ promise in July of 2012 is beginning to get faded out of the market after December’s lack of additional QE.

Monthly Chart of Italian Stocks Does Not Look Good

But perhaps more troubling – what do people do when they fear that their bank is in trouble? What do the people of Greece wish they had done before capital controls were instituted last year, capping the amount of weekly withdrawals to €420? So, it’s your money; you earned it, you saved it – but you can only use or access €420 a week because the government, and in this case, the Supra-National Central Bank behind your government say that’s what you’re allowed to have. In most cases, investors will just take their money out of the bank and put it somewhere else, and this could only exacerbate that bank’s problems as now they have less capital to fight off the problems that were already beginning to look insurmountable.

Once confidence is gone, the velocity of capital slows massively and this further hobbles banks’ lending operations. This is what created the Great Depression, people lost faith in banks and simply wouldn’t invest. This type of thing rarely turns out well.

This type of fear has been continuing to increase in the Italian banking sector for some time now. Below, we’re taking a look at Monte Dei Pasche. This is the oldest surviving bank in the world and Italy’s third largest bank. This is also the bank with the highest percentage of non-performing loans on the books, so it’s somewhat of the eye of the storm. 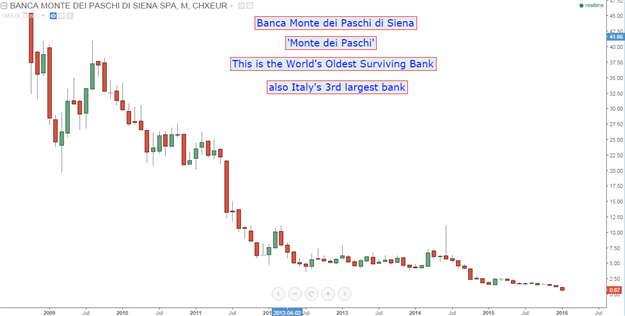 The ‘real’ problem here is the same problem at the core of China’s current issues, which we covered just two days ago in our special report on the Chinese economy: Non-performing loans. When people stop paying back their loans, the banks that hold that debt come into trouble because they’re now on the hook. This is the same thing that triggered the Financial Collapse, as a levered-up global economy began to choke on the mountains of debt that were taken out during the housing boom. As homeowners stopped paying their mortgages in increasing amounts, the bundled up Mortgage products that investors had purchased began to return lower and lower amounts until, eventually, they returned nothing at all (and in many cases brought on losses). Eventually nobody wanted to own these bundles of mortgages because they were basically toxic assets that could blow up at any time as mortgage delinquencies increased, and as prices on these CMO’s went lower and lower and lower, the brokers and dealers holding them had to take the hit.

Eventually, the Fed had to buy these toxic assets and replace that damaged capital with freshly printed money simply to keep the global economy from going into complete lock-up; and this is when the world began its addiction to QE. Now those toxic assets sit on the Fed’s balance sheet and will likely be there until maturity.

This is why Bear Sterns, who had $66.7 Billion in capital and $350.4 Billion of assets in November of 2006, was sold off for a (relatively) paltry $1.2 Billion a year and a half later. And even that was charitable, as JP Morgan initially bid $2 a share (putting the deal’s valuation at ~$240 Million), and Bear Sterns wasn’t exactly in a position to say ‘no’ given that nobody else wanted to buy them as they were in the process of collapsing. The offer was only upped out of consideration to Bear shareholders and upset investors in the hope that the increased offer might stem future legal issues.

Banks blowing up are always messy events. But if it’s just one bank in one economy, the pain can be offset because other banks can come together in a type of ‘rescue plan.’ But when an entire banking sector is hobbling, there is no help to be found inside of the economy. The Central Bank would have to step in, and that’s the fear that we have right now in Italy because that didn’t work out so well with Greece. And making this a time-sensitive issue is the fact that Non-performing loans are on the rise, and rates are negative. So lending isn’t exactly a big business at the moment, nor does it pay very well. And further to that point – negative rates mean capital flight. Investors are literally being incentivized to drive their capital elsewhere outside of the European Union, and for an already fragile Italian banking sector, this exodus of capital. So what we have here is this convergence of factors that puts the Italian banking sector firmly in the cross-hairs of the global economy.

Why Have These Developments Hastened So Quickly?

The Italian government actually came to an agreement to help these banks earlier this week. Italy got the greenlight from the European Union to allow banks to basically sell these portfolios of non-performing loans to private investors with a government guarantee. This was designed to ease the pain on Italian banks by getting those non-performing loans off of the books so that these banks could get back to lending to credit-worthy entities.

And this is getting into some gray area with the European Central Bank. The ECB technically isn’t supposed to be giving direct state aid per the design of the Union, but this scheme was being justified because public funds aren’t technically being used to directly purchase the bad debt; only guaranteeing it. But, exposure is exposure, and as we learned from the Financial Collapse, exposure has a cost.

But likely responsible for the increase in pressures are the flurry of geo-political factors hitting the European continent all at the same time, and this just further exposes those already-existing vulnerabilities like the Italian banking sector holding an obtuse amount of non-performing loans on their books. As those themes develop further, we’ll likely see even more pressure driven towards these sectors that have been flagging signs of weakness.

Making matters more difficult is the fact that Italy has no direct control over their currency. Pre-European Union, Italy would simply be able to go out into the market and weaken the Lira. And while competitive devaluations or ‘beggar thy neighbor’ strategies rarely work out in the long-term, they can certainly provide a short-term stimulus to get an ailing sector over a few bumps in the road.

But with the entire continent of Europe being subscribed to the same currency, the value of the Euro is kept artificially high by European countries that aren’t seeing the same type of pain. This basically integrates risks throughout the European economy.

And perhaps more to the point, the European Central Bank has been trying to turn the corner with their own QE program that, as of yet, hasn’t shown many signs of promise. The initial impacts were positive, as the Euro dove on the announcement of QE in July of 2014. But when QE actually came into play in March of the following year, the EUR/USD had already set a low and began working on a bear flag. So, we can technically say that the prospect of QE was more beneficial to the Euro than actual QE was. This may be one reason that the ECB backed off of increasing the program in December, and prodded hopes for a potential increase in March at their most recent January meeting.

So, expect the Euro to trade counter-intuitively until we get to that March meeting – meaning, as risk aversion increases or as investors look for cover, look for EUR/USD strength as carry trades unwind. As ‘calm’ comes back into markets or should risk aversion recede, look for EUR/USD to move lower on the anticipation of the ECB increasing their program at some point in the future while the US continues to look at normalizing policy.

Just because EUR/USD may rise while stocks are selling-off, it doesn’t mean that the Euro is a safe-haven. More likely this is just investors closing out carry positions (unwind).