The ECB Fires a Warning Signal, but Will They Deliver in December?

- The ECB warned of a ‘sharp repricing in global risk premia’ given the Fed’s potential interest rate hike in December combined with the economic slowdown with Asia.

- This is being taken as yet another reason to sell the Euro in anticipation of an expected increase to the bank’s QE program at their December meeting, but with so many warning signs flashing at the same time, it may reason for the bank to take a cautious approach and look to re-evaluate QE AFTER the December FOMC decision.

- With liquidity already thin, any shocks or suprises could lead to massive movements, and should the ECB not increase their program in December, we may see the EUR/USD catch a strong-bid higher, not too indifferent than the June 2014 ECB meeting (further explained below).

At the bi-annual Financial Stability Review, the European Central Bank fired off a warning signal to rest of the world. The ECB mentioned the obvious, and two of the same factors that we’ve been discussing for months in these Market Talk articles: The slowdown in Asia combined with Fed ‘liftoff’ can create huge moves to re-price risk assets. In plain speak, that means that as interest rates go up, investors may begin to question these exuberant valuations that have been built into global equities as super-low (and other asset classes like real estate) interest rates drove investment flows into risky asset classes (like stocks).

But as rates rise, this changes matters considerably. Now, not only is the opportunity cost of investing in stocks higher (because interest rates moving up means there is more opportunity to invest in bonds v/s stocks), but we’re also looking at a long cycle of rate hikes that will continually add pressure on the operating environment for many companies in even the strongest of economies. This is just another reason to not be so aggressive with stock allocations in the investment portfolio over the next 10 years, and this rising rate environment can significantly change the prospect of companies within that economy.

But this problem isn’t relegated to ONLY strong, developed economies. As a matter of fact, the case can be made that the more developed an economy is, the more vulnerable it may become as this situation further develops; and this is because of globalization and that fact that the global economy is essentially in this mess together. If the past six years have taught us anything, it’s that currency-driven trade and capital flows don’t provide long-lasting relief to economies. We’ve seen this story play out numerous times in numerous economies by now. Economy A weakens their currency with some type of intervention policy, and this helps exports temporarily as this cheaper currency makes those exported products cheaper in international markets. This increase in business provides hope that the policy may actually work, so the QE program is ‘tapered’ or ‘slowed down,’ and then the currency increases in value and that boost to exports is gone even quicker than it came in the first place, and that economy is back in the same mess that they were in before, but this time holding even more debt.

This is basically what is happening in Europe right now. We discussed the historical trajectory of where the EUR/USD is in the article on Friday, The Euro: From Whatever it Takes to Whatever it Must. The Euro was basically looking like it was done in the summer of 2012. The PIIGS of Europe raised enough questions as to long-term economic viability that many had just begun to assume the Euro was going to break-up. Yields on government bonds out of Portugal, Italy, Spain and Greece were approaching (or in some cases, even eclipsing) junk bond levels! But on July 24th, 2012, Mario Draghi dropped the ‘whatever it takes’ promise to keep the Euro together. Over the next two years, the Euro ran higher from the 1.2000’s to almost 1.4000; but this wasn’t necessarily a good thing for Europe. Because a stronger Euro meant that it was more expensive for foreigners to travel to Europe, or to buy exported European goods (like Volkswagen automobiles), and this added a crimp to European industry and the European recovery as a whole.

This had become so severe that we had started to see Europe deflating again, and in May of 2014, Mr. Draghi stepped up to the plate in announcing the ECB was going to investigate QE. No formal announcement was made at that meeting other than an announcement would likely be forthcoming. Investors sold the Euro in anticipation of an announcement at the June ECB meeting (very much like what is happening today with the December ECB meeting). In June, we got a disappointment in no QE announcement from the ECB, and the Euro spiked up from 1.3500 to 1.3700, but in July we finally got the news that everyone was looking for, and the Euro started its dead-drop of ~3,000+ pips that ran into March of this year.

There is just one problem: At this point, European QE hasn’t yet begun to ‘work.’ As in, we saw some initial signs of inflation which many had hoped would prelude growth, but that hasn’t yet materialized.

After that low in EUR/USD was set in March, the Euro started a bear-flag formation that saw the EUR/USD trade within a rather consistent up-ward sloping channel at the bottom of the down-trend. This was one of the ways that we illustrated to traders that trend-resumption entries could be sought out in the article, Is the EUR/USD Down-Trend Ready for Resumption.

But the rising channel in EUR/USD simply meant that European recovery was going to be even more difficult, and when combined with the multiple pressure points being seen in the world right now, namely a major commodity sell-off, a significant slowdown in Asia and that first rate hike out of the Federal Reserve in over nine years; the prospects of European recovery don’t look very attractive.

So the siren calls for more QE have been ringing. And in October, Mr. Draghi gave the world the initial sign of what they wanted by announcing that the bank would review their QE-program at their next meeting in December. It’s important to note here – no announcement has been made. No QE-increases are imminent yet, and given the fact that Mr. Draghi has largely gotten what he already wanted from that announcement in seeing the Euro move lower, we may be in for a redux of May/June 2014, in which much of the world is expecting a bombshell in December that doesn’t actually drop until January or March. The first ECB meeting of 2016 is on January 21st, followed by another on March the 10th.

With a very pensive Fed meeting on the calendar for December 16th, combined with the continued development of these various ‘themes’ around the world, we may see the European Central Bank take a step back, and elect to keep some powder dry in case markets put in another August-like reversal (as the ECB has just indicated that they’re afraid of). If history is any guide, the ECB is in no rush to fire this liquidity cannon unless they’re fairly certain that it will a) provide impact b) won’t be offset two weeks later by a rate hike out of the US and c) will try to remain as flexible as possible as the Euro-zone has considerable issues outside of Economics at work right now (defense/stability/war on terror).

Now is not the time to take a leap of faith if you’re a European Central Banker. 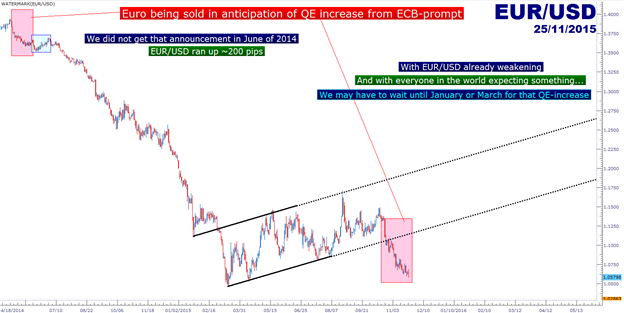