USD: The US Dollar fell in the wake of the Midterm election outcome, which produced a divided congress with the Republicans retaining the Senate and the Democrats winning the House of Representatives. Ultimately, this has been taken as a Dollar negative given that the Trump administration may face increased hurdles in regard to domestic agenda’s, most notably, further tax cuts and fiscal stimulus. USD index hovers around intra-day lows as markets digest with the basket back below the 96.00 handle.

EUR: The Euro has continued to track higher this morning, taking out the 50% Fibonacci Retracement at 1.1447 (rise from 1.0340-1.2555). Much of the upside in the Euro had been exacerbated by a bout of short covering with bearish bets at $4bln in the run up to the election.The upside in the Euro against the greenback had ran into notable resistance at the 1.15 handle with a huge 6.3bln vanilla option, which is set to expire on Friday.

GBP: Modest gains for the Pound which had climbed above the 1.31 handle amid the weakness in the US Dollar. Although, much of the attention for GBP remains on Brexit, which has taken some of the shine from the Pound, dipping back towards 1.3140 from highs of 1.3174. As it stands, UK cabinet is set to have a second meeting on Friday/Saturday with time running out for November summit to be announced. However, option markets suggest positive news may be on the way with 1-month risk reversals continuing to show a reduction in premium for GBP puts.

NZD: The Kiwi is flying high today after yesterday’s stellar jobs report, in which the jobless rate dropped to the lowest level in a decade, falling to 3.9% beating expectations of 4.5%. Alongside this, the jobs growth more than doubled to 1.1% from 0.5%. This in turn has reduced bets of further easing by the RBNZ, who are to announce their latest monetary policy decision at 2000GMT.

Crude Oil: OPEC jawboning has taken Brent crude prices back above $73/bbl with reports suggesting that Russia and Saudi Arabia could be looking at reducing oil production in 2019. This had shortly been followed by reports that OPEC+ were also considering production cuts next year, which in turn has underpinned prices this morning. Much of this talk has been on the premise that Iranian sanctions may not be as bad as initially feared given the recent announcement by the US to provide oil waivers, consequently reducing the impact of sanctions. 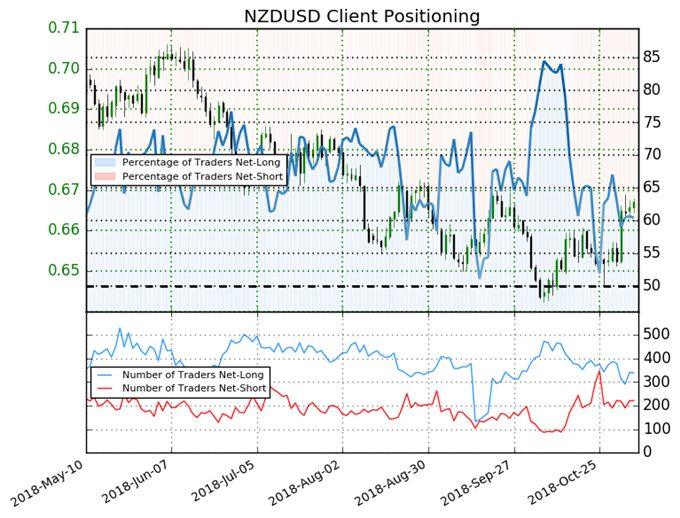 We typically take a contrarian view to crowd sentiment, and the fact traders are net-long suggests NZDUSD prices may continue to fall. Positioning is more net-long than yesterday but less net-long from last week. The combination of current sentiment and recent changes gives us a further mixed NZDUSD trading bias.