The Reserve Bank of Australia (RBA) interest rate decision may keep AUD/USD under pressure as the central bank is widely expected to keep the official cash rate (OCR) at the record-low of 1.50%.

Fresh comments from the RBA may do little to influence the Australian dollar as the central bank persistently promotes a wait-and-see approach for monetary policy, and officials may continue to tame bets for an imminent adjustment in the cash rate as ‘the low level of interest rates is continuing to support the Australian economy.’

As a result, the RBA may merely attempt to buy more time, and more of the same from Governor Philip Lowe & Co. may ultimately produce headwinds for AUD/USD especially as the Federal Reserve appears to be on track to implement additional rate-hikes in 2018.

However, an unexpected shift in the forward-guidance for monetary policy is likely to trigger a bullish reaction as it fuels bets for an RBA rate-hike, and a material adjustment in the central bank rhetoric should heighten the appeal of the Australian dollar as officials prepare to switch gears. Sign up and join DailyFX Junior Currency Analyst Daniel Dubrovsky LIVE to cover the RBA meeting.

As expected, the Reserve Bank of Australia (RBA) held the official cash rate (OCR) at the record-low of 1.50% in July, and it seems as though the central bank will stick to the current policy for the foreseeable future as ‘inflation is low and is likely to remain so for some time, reflecting low growth in labour costs and strong competition in retailing.’ The comments suggest the RBA is in no rush to implement higher borrowing-costs as ‘household income has been growing slowly and debt levels are high,’ and Governor Philip Lowe & Co. may stick to the current script throughout 2018 as ‘one uncertainty regarding the global outlook stems from the direction of international trade policy in the United States.’

Despite the limited reaction, the Australian dollar gained ground following the RBA meeting, with AUD/USD climbing above the 0.7350 region to close the day at 0.7386. Learn more with the DailyFX Advanced Guide for Trading the News. 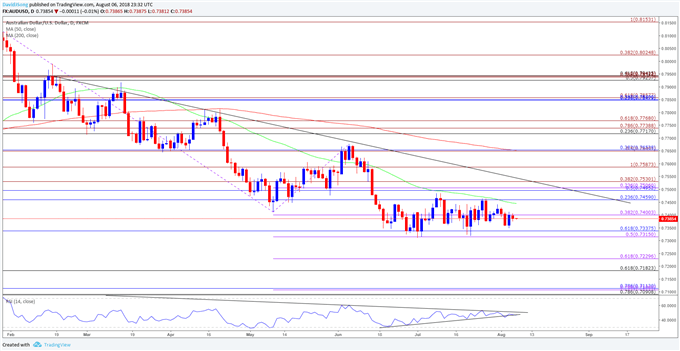