The Reserve Bank of New Zealand (RBNZ) interest rate decision may keep NZD/USD under pressure should Governor Adrian Orr & Co. stick to the status quo and endorse a wait-and-see approach for monetary policy.

More of the same at Governor Orr’s first meeting is likely to sap the appeal of the New Zealand dollar as the central bank remains in no rush to lift the cash rate off of the record-low, and the RBNZ may continue to strike a cautious tone amid the ongoing slack in the real economy.

However, a material shift in the forward-guidance for monetary policy may spark a bullish reaction in NZD/USD as it boosts bets for an imminent rate-hike, and the central bank may change it tune throughout 2018 as ‘inflation is forecast to trend upwards towards the midpoint of the target range’ over the medium-term. Sign up and join DailyFX Currency Strategist Ilya Spivak LIVE to cover the RBNZ interest rate decision.

The Reserve Bank of New Zealand (RBNZ) kept the cash rate at the record-low of 1.75% at acting-Governor Grant Spencer’s last meeting, with the central bank reiterating that ‘monetary policy will remain accommodative for a considerable period’ in an effort to combat the ongoing slack in the real economy.

The RBNZ noted that ‘GDP was weaker than expected in the fourth quarter, mainly due to weather effects on agricultural production,’ and went onto say that ‘CPI inflation is expected to weaken further in the near term due to softness in food and energy prices and adjustments to government charges.’

The New Zealand dollar struggled to hold its ground following more of the same from the RBNZ, with the NZD/USD rate edging lower throughout the day to close at 0.7206. 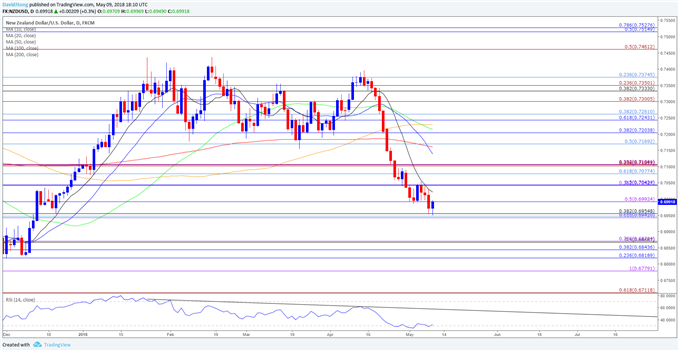 Review the DailyFX Advanced Guide for Trading the News to learn our 8 step strategy.