- Will Acting-Governor Grant Spencer Alter the Monetary Policy Outlook Before His Departure?

The Reserve Bank of New Zealand (RBNZ) interest rate decision may drag on NZD/USD as the central bank appears to be in no rush to lift the cash rate off of the record-low, but a potential shift in the monetary policy outlook may curb the recent decline in in the exchange rate as market participants boost bets for a rate-hike in 2018.

The RBNZ may reiterate ‘monetary policy will remain accommodative for a considerable period’ as the recent updates to the Consumer Price Index (CPI) showed an unexpected slowdown in the headline reading for inflation, and the central bank may also attempt to talk down the New Zealand dollar as a weaker exchange rate would ‘increase tradables inflation and promote more balanced growth.’

However, acting-Governor Grant Spencer may ultimately utilize his last meeting to prepare New Zealand households and businesses for higher borrowing-costs as Adrian Orr takes the reins in March, and a batch of hawkish comments may trigger a bullish reaction in NZD/USD as the central bank prepares to alter the course for monetary policy. Sign up & join DailyFX Currency Strategist Ilya Spivak LIVE to cover the RBNZ rate decision.

As expected, the Reserve Bank of New Zealand (RBNZ) kept the cash rate at the record-low of 1.75%, with acting-Governor Grant Spencer larger endorsing a wait-and-see approach for monetary policy as the central bank head reiterates ‘monetary policy will remain accommodative for a considerable period.’ It seems as though the RBNZ remains in no rush to move away from the accommodative stance as ‘underlying inflation remains subdued,’ and the central bank may stick to the sidelines until Adrian Orr takes the helm in March as ‘numerous uncertainties remain and policy may need to adjust accordingly.’

NZD/USD edged higher even as the RBNZ stuck to the current script, but the move was short-lived, with the pair consolidating throughout the day to close at 0.6947. New to trading? Review the ‘Traits of a Successful Trader’ series on how to effectively use leverage along with other best practices that any trader can follow. 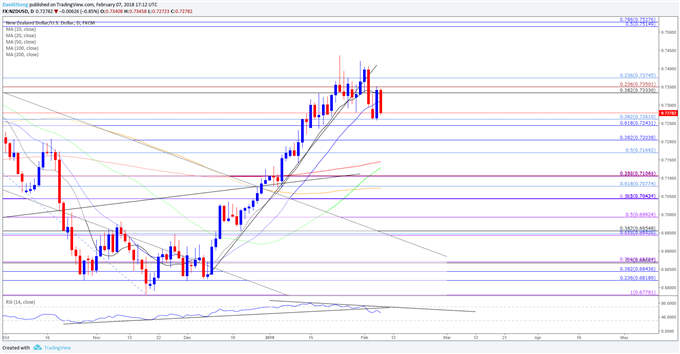