- Reserve Bank of Australia (RBA) to Hold Official Cash Rate at Record-Low of 1.50%.

The Reserve Bank of Australia’s (RBA) last interest rate decision for 2017 may shake up the near-term outlook for AUD/USD should the central bank prepare households and businesses for higher borrowing-costs.

The RBA is likely to reiterate that ‘holding the stance of monetary policy unchanged would be consistent with sustainable growth in the economy and achieving the inflation target over time’ as the region continues to face below-target inflation. In turn, Governor Philip Lowe and Co. may largely endorse a wait-and-see approach for monetary policy, with the Australia dollar at risk of facing a bearish reaction as the central bank remains in no rush to remove the record-low cash rate.

However, a growing number of RBA officials may adopt a hawkish tone as Governor Lowe notes ‘it is more likely that the next move in interest rates will be up, rather than down,’ and a shift in the policy outlook may spark a larger recovery in AUD/USD as the central bank starts to show a greater willingness to move away from the easing-cycle.

The Reserve Bank of Australia (RBA) stuck to the sidelines in November, with Governor Philip Lowe and Co. largely endorsing a wait-and-see approach for monetary policy as ‘inflation remains low, with both CPI and underlying inflation running a little below 2 per cent.’ In turn, it seems as though the RBA will carry the record-low cash rate into 2018 as officials warn ‘growth in housing debt has been outpacing the slow growth in household income for some time.’

The initial market reaction was short-lived, with AUD/USD quickly pulling back from the 0.7700 handle to end the day at .07643. Interested in the market reaction to the RBA? Sign up & join DailyFX Market Analyst David Cottle LIVEto cover the interest rate decision! 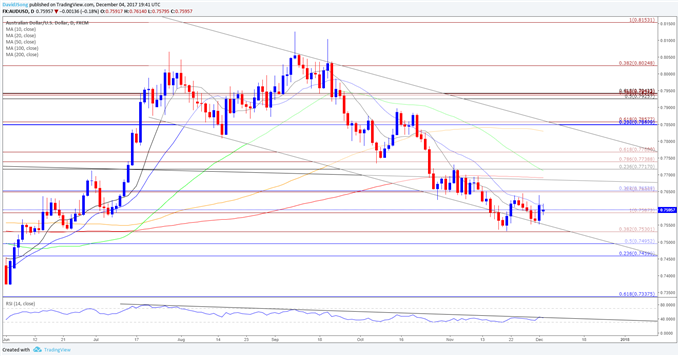 Want to trade the RBA interest rate decision but don’t have a strategy? Review the FREE DailyFX Advanced Guide for Trading the News to learn our 8 step strategy.