The Reserve Bank of New Zealand (RBNZ) interest rate decision may yield a limited market reaction as the central bank retain the record-low cash rate, but the accompanying policy statement may drag on NZD/USD should Governor Graeme Wheeler and Co. toughen the verbal intervention on the local currency.

The RBNZ may stick to the sidelines beyond Governor Wheeler’s departure in September as Deputy Governor Grant Spencer takes the helm for the next six-months. In turn, the central bank may continue to endorse a wait-and-see approach throughout the remainder of the year as 2Q Employment unexpectedly contracts 0.1%, while the Consumer Price Index (CPI) slows more-than-expected during the same period. At the same time, the RBNZ may follow the Reserve Bank of Australia (RBA) and toughen the verbal intervention on the local currency as ‘a lower New Zealand dollar would help rebalance the growth outlook towards the tradables sector.’

However, the fresh remarks may once again spark a bullish reaction in NZD/USD if the RBNZ continues to soften its dovish tone and shows a greater willingness to gradually move away from its easing-cycle.

The Reserve Bank of New Zealand (RBNZ) kept the official cash rate at the record-low of 1.75%, but the central bank appeared to be softening its dovish tone, with Governor Graeme Wheeler and Co. noting that ‘the growth outlook remains positive, supported by accommodative monetary policy, strong population growth, and high terms of trade.’ The RBNZ went onto say that the ‘recent changes announced in Budget 2017 should support the outlook for growth,’ but it seems as though the central bank is in no rush to normalize monetary policy as ‘numerous uncertainties remain and policy may need to adjust accordingly.’ The New Zealand dollar gained ground followed the upbeat tone, with NZD/USD climbing above the 0.7250 region to end the day at 0.7265. 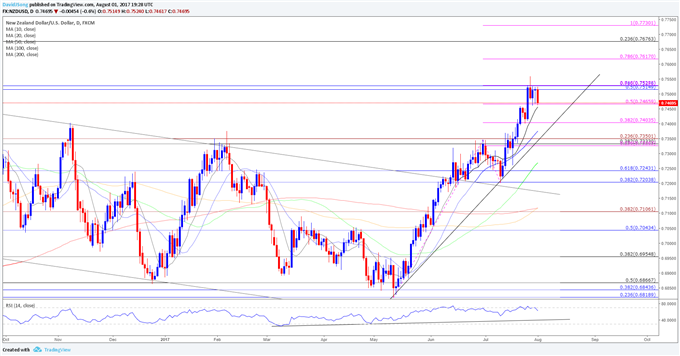 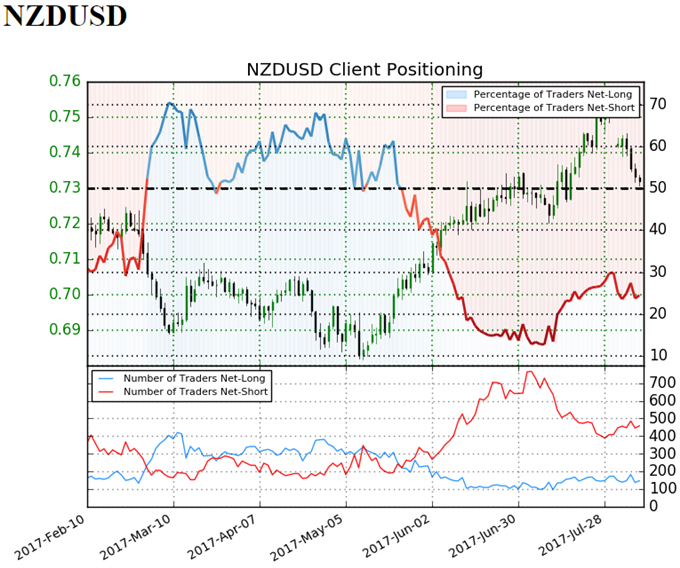