- Will the Governing Council Start to Taper the Asset-Purchase Program?

With the ECB in no rush to remove the zero-interest rate policy (ZIRP), market participants are likely to pay increased attention to the forward-guidance as the quantitative easing (QE) program is set to expire in December, and the Euro stands at risk of giving back the advance from earlier this month should the central bank show a greater willingness to carry the non-standard measure into 2018.

Nevertheless, a more bullish scenario may unfold should the Governing Council adopt a hawkish tone and look to conclude its easing-cycle over the coming months. The ECB may start to taper the asset-purchase program as officials note the ‘very adverse scenarios for the inflation outlook had become less likely, in particular as deflation risks had largely vanished,’ and a further shift in the monetary policy outlook may fuel the adjustment in EUR/USD behavior especially as the pair quickly approaches the 2016-high (1.1616).

Even though the euro-area is now ‘projected to expand at a somewhat faster pace than previously expected,’ the European Central Bank (ECB) stuck to the sidelines in June, with officials largely endorsing a wait-and-see approach as ‘measures of underlying inflation remain low and have yet to show convincing signs of a pick-up.’ At the same time, the Governing Council appears to have put a floor on interest rates as ECB officials now ‘expect them to remain at their present levels for an extended period of time,’ and President Mario Draghi and Co. may continue to gradually change their tune over the coming months as ‘the risks surrounding the euro area growth outlook are considered to be broadly balanced.’ Nevertheless, the Euro struggled to hold its ground following the fresh developments, with EUR/USD closing the day at 1.1212. 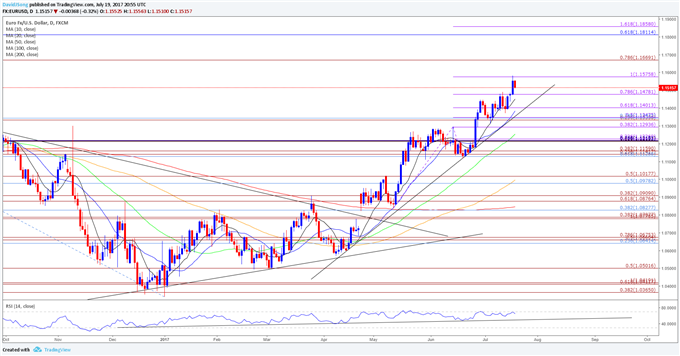