- Retail Sales to Rebound 0.6% After Contracting for Last Two Months.

A rebound in U.S. Retail Sales accompanied by a signs of sticky inflation may boost the appeal of the greenback, but another series of lackluster data prints may prop up the EUR/USD exchange rate as it drag on interest-rate expectations.

With Fed Fund Futures now highlight a greater than 80% probability for a June rate-hike, bets for higher borrowing-costs may keep the dollar afloat throughout the remainder of the month, and the central bank may unveil a more detailed exit strategy in the second-half of 2017 as officials show a greater willingness to unload the balance sheet. However, indications of a slowing recovery may push the Federal Open Market Committee (FOMC) to buy more time, and Chair Janet Yellen and Co. may continue to project a terminal rate close to 3.00% as ‘market-based measures of inflation compensation remain low; survey-based measures of longer-term inflation expectations are little changed, on balance.’

The U.S. Consumer Price Index (CPI) narrowed to an annualized 2.4% from 2.7% in February, with the core rate of inflation highlighting a similar behavior as the reading slipped to 2.0% from 2.2% during the same period. A separate report showed Retail Sales narrowed another 0.2% in March, with the weakness led by a 1.2% decline in demand for motor vehicle & parts, while discretionary spending for clothing bounced back 1.0% after falling 2.7% in February. The greenback struggled to hold its ground followed the batch of dismal data, with EUR/USD climbing to a session high of 1.0630, but the market reaction was short-lived as the pair ended the day at 1.0602. 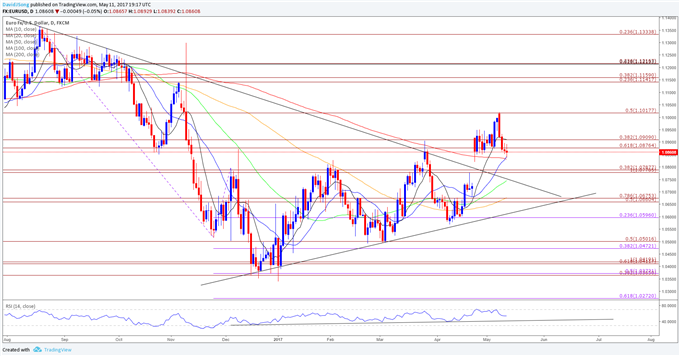 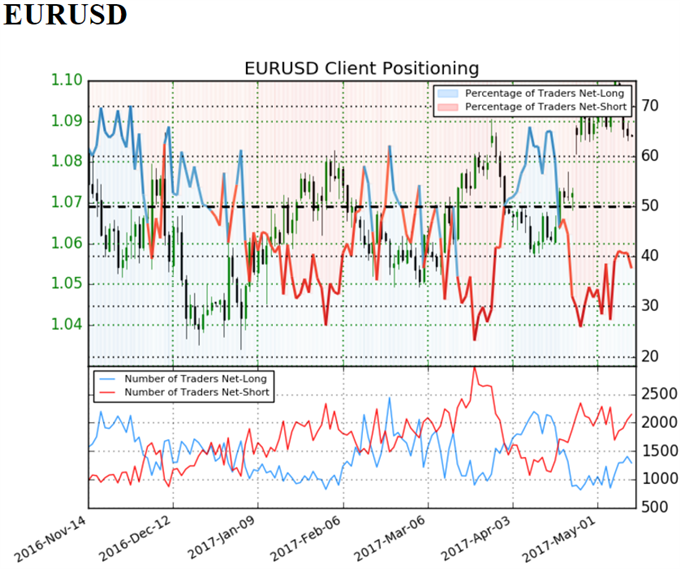 Retail trader data shows 37.6% of traders are net-long EUR/USD with the ratio of traders short to long at 1.66 to 1. In fact, traders have remained net-short since April 18 when EUR/USD traded near 1.06042; price has moved 2.5% higher since then. The number of traders net-long is 11.1% lower than yesterday and 31.2% higher from last week, while the number of traders net-short is 0.4% higher than yesterday and 8.9% lower from last week.For More Information on Retail Sentiment, Check Out the New Gauge Developed by DailyFX Based on Trader Positioning.