- Annualized Growth Rate to Recover From Lowest Reading Since 2009.

Australia’s 4Q Gross Domestic Product (GDP) report may fuel the near-term rebound in AUD/USD as the growth rate is projected to increase 0.7% after contracting 0.5% during the last three-months of 2016.

A meaningful expansion in economic activity may heighten the appeal of the Australian dollar and encourage the Reserve Bank of Australia (RBA) to adopt a more upbeat tone at the next policy meeting on March 7 as ‘a return to reasonable growth is expected in the December quarter.’ With that said, Governor Philip Lowe and Co. may show a greater willingness to gradually move away from its easing-cycle, but the central bank appears to be in no rush to lift the official cash rate from the record-low as ‘the rise in underlying inflation expected to be a bit more gradual.’ In turn, it seems as though the RBA bar remains high for the central bank to abandon its wait-and-see approach, and the committee may look to toughen the verbal intervention on the local currency as ‘an appreciating exchange rate would complicate this adjustment.’

The record trade surplus paired with the ongoing expansion in the labor market may generate a meaningful pickup in the growth rate, and a better-than-forecast GDP report may push the aussie-dollar back towards the monthly high (0.7741) as it boosts interest-rate expectation.

However, subdued wage growth accompanied by the slowdown in building activity may continue produce headwinds for the economy, and a dismal GDP print may spark a bearish reaction in the Australia dollar as it puts pressure on the RBA to further embark on its easing-cycle. 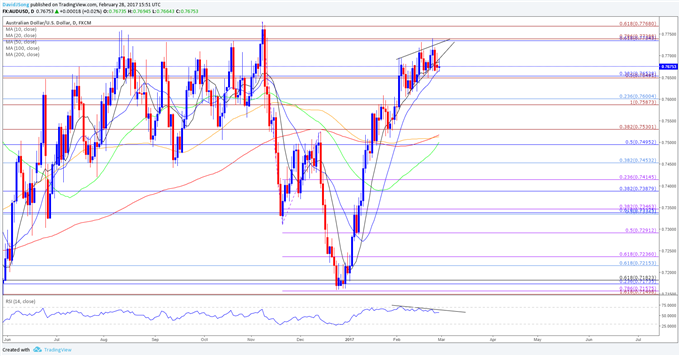 Australia’s 3Q Gross Domestic Product (GDP) report showed a 0.5% decline in the growth rate, with the economy posting the first contraction since 2011. The annualized reading slowed to 1.8% from 3.1% in the second-quarter to mark the lowest reading since 2009, with the slowdown largely led by a decline in business investment, while private consumption increased 0.2% during the same period after expanding 0.6% during the three-months through June. The Australian dollar dipped below the 0.7450 region following the larger-than-expected contraction in the growth rate, but the market reaction was short-lived, with the pair ending the day at 0.7481. 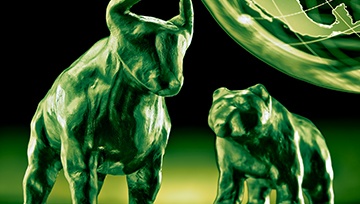