- Canada Employment to Contract for First Time Since November.

A 5.0K contraction in Canada Employment may generate a larger recovery in the USD/CAD exchange rate as it puts pressure on the Bank of Canada (BoC) to further support the real economy.

After keeping the benchmark interest rate unchanged throughout 2016, it seems as though Governor Stephen Poloz and Co. are gradually moving away from the easing-cycle as the Canadian economy is anticipated to reach ‘full capacity around mid-2018, in line with October’s projection.’ Even though employment is projected to slow in January, the figures have beat market forecasts for the last five consecutive month, with another unexpected rise in job growth likely to produce a bullish reaction in the Canadian dollar. However, signs of a weakening labor market may force the BoC to adopt a dovish outlook for monetary policy especially as the central bank warns ‘inflation in Canada has been lower than anticipated.’

Rising inputs costs accompanied by the slowdown in household spending may push Canadian firms to scale back on hiring, and a dismal development may weigh on the loonie as it dampens the outlook for growth and inflation.

Nevertheless, the recent pickup in global trade paired with the ongoing expansion in the housing market may support another positive print, and a unexpected rise in employment may undermine the near-term recover in USD/CAD as it encourages the BoC to slowly remove the highlight accommodative policy stance. 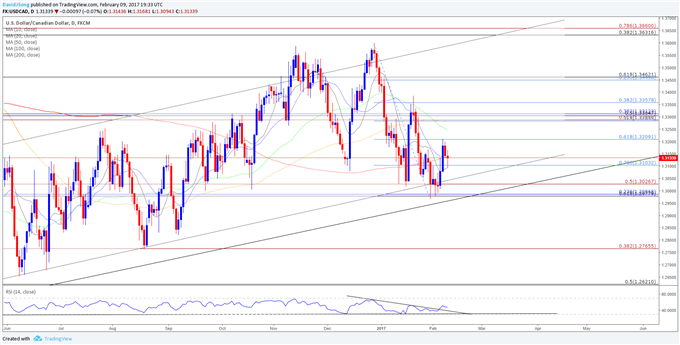 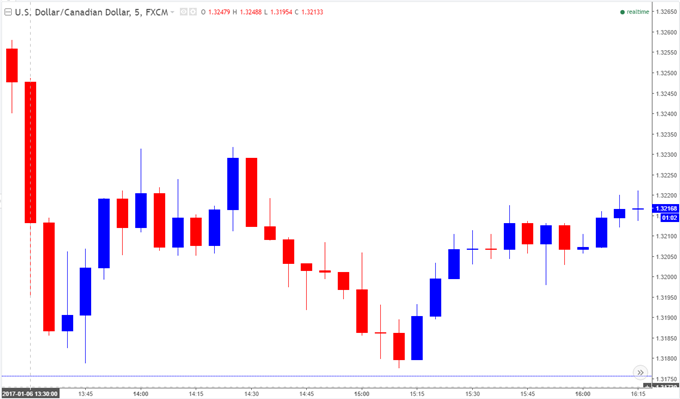 The Canadian economy unexpectedly added 53.7K jobs in December, with the gain driven by an 81.K expansion in full-time positions. A deeper look at the report showed part-time employment narrowed 27.6K during the same period, while the jobless rate climbed to an annualized 6.9% from 6.8% in November which was accompanied by an unexpected uptick in the labor force participation rate. The Canadian dollar gained ground against its U.S. counterpart following the better-than-expected employment report, but the move below the 1.3200 handle was short-lived, with the pair ending the day at 1.3237.