- Has the RBA Hit the End of Its Easing-Cycle?

More of the same from the Reserve Bank of Australia (RBA) may produce another limited reaction in AUD/USD, but a shift in the monetary policy outlook may fuel the near-term advance in the aussie-dollar exchange rate should Governor Philip Lowe and Co. show a greater willingness to gradually move away from the accommodative policy stance.

After delivering two rate-cuts in 2016, the RBA may continue to soften its dovish tone as higher commodity prices are ‘providing a boost to national income’ and improves Australia’s terms of trade. In turn, the fresh batch of central bank rhetoric may heighten the appeal of the aussie should Governor Lowe curb speculation for additional monetary support, but the first interest rate decision for 2017 may generate a lackluster response should the RBA keep the door open to further insulate the real economy.

Signs of sticky price growth paired with the record trade surplus may encourage the RBA to adopt an improved outlook for the region, and the Australian dollar may extend the advance from earlier this year should the central bank talk down expectations for additional monetary support.

Nevertheless, the slowdown in private-sector consumption accompanied by the economic contraction in the third-quarter of 2016 may push Governor Lowe to sound more cautious this time around, and the aussie-dollar may struggle to hold its ground going should the RBA keep the door open to implement lower borrowing-costs. 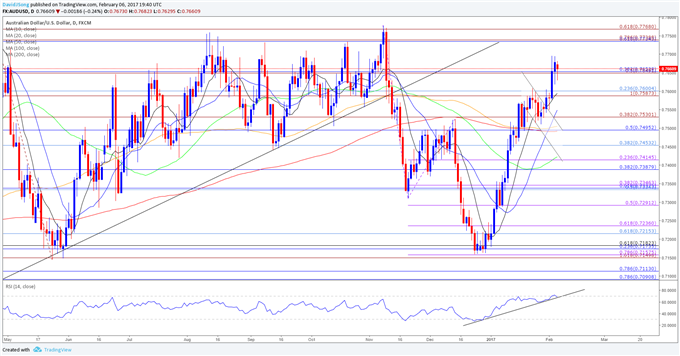 Check out the short-term technical levels that matter for AUD/JPY heading into the rate decision! 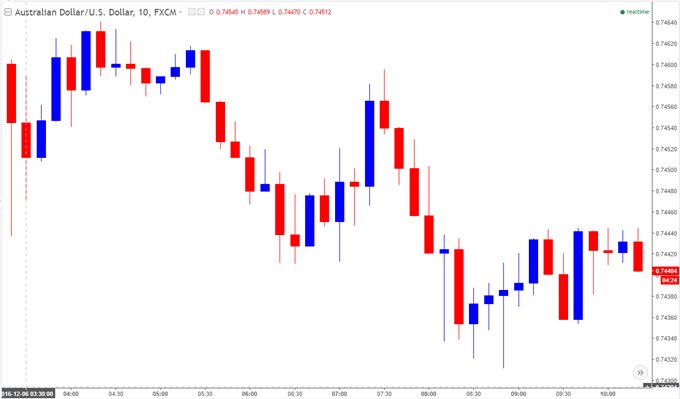 After reducing the official cash rate to a record-low of 1.50% in August, the Reserve Bank of Australia (RBA) continued to endorse a wait-and-see approach at its last interest rate decision for 2016 as ‘the Board judged that holding the stance of policy unchanged at this meeting would be consistent with sustainable growth in the economy and achieving the inflation target over time.’ At the same time, the RBA appears to be softening its dovish tone as Governor Philip Lowe and Co. argue ‘globally, the outlook for inflation is more balanced than it has been for some time,’ but it seems as though the central bank is in no rush to move away from its easing-cycle as inflation is expected to remain low for some time, before returning to more normal levels.’ More of the same from the RBA generated a limited market reaction, with AUD/USD consolidating throughout the day to close at 0.7461.