Canada’s 2Q Gross Domestic Product (GDP) report may drag on the loonie and fuel the near-term advance in USD/CAD as the economy is expected to contract 1.5% following the 2.4% expansion during the first three-months of 2016.

A dismal GDP report may encourage the Bank of Canada (BoC) to further support the real economy as the region continues to adjust to the oil-price shock, but the one-off event spurred by the Alberta wildfires may have a limited impact on the monetary policy outlook as Governor Stephen Poloz and Co. argue ‘the risks to the profile for inflation are roughly balanced.’

Easing job growth accompanied by the slowdown in private-sector consumption may spark a sharp contraction in the growth rate, and a dismal GDP report may trigger further losses in the Canadian dollar as it drags on interest-rate expectations.

Nevertheless, the pickup in business sentiment paired with signs of stronger investment may generate a better-than-expected GDP print, and a positive development may spur a bullish reaction in the loonie as it raises the BoC’s scope to retain the current policy throughout 2016. 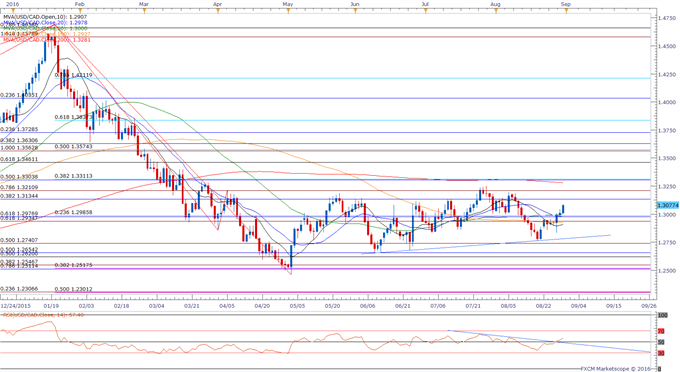 The Canadian economy grew an annualized 2.4% in the first-quarter following a revised 0.5% expansion during the last three-months of 2015, with the pickup led by a 2.1% rise in private-sector consumption. A deeper look at the report showed business investment slipped another 1.7% during the same period after contracting 6.0% during the last three-months of 2015, while exports of goods and services advanced 6.9%. The Canadian dollar struggled to hold its ground following the weaker-than-expected Gross Domestic Product (GDP) report, with USD/CAD coming off of 1.3020 to end the day at 1.3091.