- U.K. Mortgage Applications to Slow to Annualized 61.9K in July- Lowest Since March 2015.

GBP/USD may continue to give back the rebound from the August low (1.2864) as U.K. Mortgage Applications are anticipated to narrow for the second consecutive month in July, with current market forecast calling for an annualized reading of 61.9K.

Signs of weaker growth are likely to push the Bank of England (BoE) to further embark on its reestablished easing cycle as ‘a majority of members expect to support a further cut in Bank Rate to its effective lower bound,’ but it seems as though the central bank will avoid following the path of its European counterparts especially as Governor Mark Carney rules out a zero-interest rate policy (ZIRP) for the U.K.

The slowdown in building activity accompanied by easing home prices may drag on private-sector lending, and a dismal development may spark a bearish reaction in the British Pound as it fuels expectations for additional monetary support.

Nevertheless, the pickup in business investment paired with the expansion in household spending may boost lending, and a better-than-expected print may prop up the sterling as it dampens the risk for a recession in the U.K. 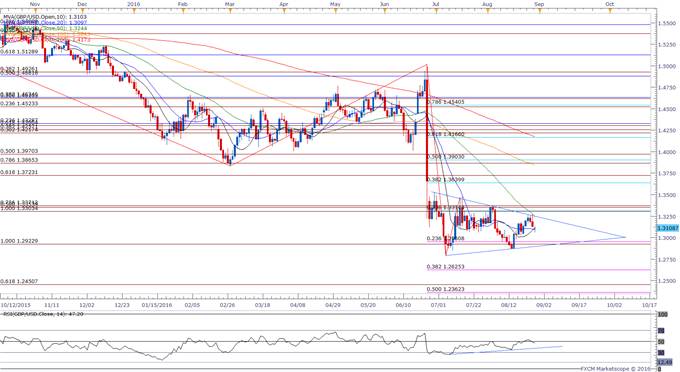 Impact that the U.K. Mortgage Applications has had on GBP during the last release

U.K Mortgage Approvals narrowed to an annualized 64.8K in June from a revised 66.7K the month prior to mark the lowest reading since May 2015, while the M4 Money Supply increased an annualized 3.5% during the same period to mark the fastest pace of growth since February 2010. With the economic outlook mired by ‘Brexit,’ the Bank of England (BoE) is widely anticipated to reestablish its easing cycle in an effort to combat the downside risks surrounding the U.K. economy, but the central bank may be careful in managing market expectations as Governor Mark Carney sees a risk of overshooting the 2% inflation-target over the policy horizon. GBP/USD traded marginally lower following the data print, but the British Pound regained its footing during the North American trade to end the day at 1.3222.