Even though U.K. Jobless Claims are projected to increase another 9.0K in July, signs of stronger wage growth may keep the British Pound afloat, with GBP/USD at risk of staging a larger recovery should the data tame market expectation for additional monetary support.

The Bank of England (BoE) is widely anticipated to further embark on its easing cycle this year as ‘a majority of members expect to support a further cut in Bank Rate to its effective lower bound,’ but the central bank may move to the sidelines after delivering the comprehensive easing packing earlier this month especially as Governor Mark Carney rules out a zero-interest rate policy (ZIRP) for the U.K.

Even though ‘Brexit’ clouds the fundamental outlook for the region, signs of resilience in the U.K. economy accompanied by strong wage growth may spark a bullish reaction in GBP/USD and encourage the BoE to retain the current policy at the September 15 meeting especially as the central bank sees a risk of overshooting the 2% inflation-target over the policy horizon.

Nevertheless, waning business sentiment paired with the weakening outlook for global growth may drag on the labor market, and a dismal employment report may drag on the British Pound as market participants boost bets for additional monetary support. 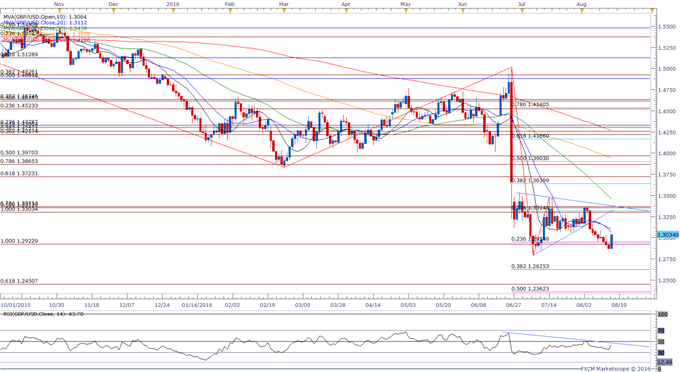 Impact that the U.K. Jobless Claims Report has had on GBP during the last release

U.K Jobless Claims unexpectedly climbed for a second consecutive month in June, with the report highlight another 0.4K advanced following a revised 12.2K expansion in May. At the same time, the headline reading for U.K. wage growth advanced an annualized 2.3% during the three-months through May after expanding 2.0% the month prior, while Weekly Earnings excluding Bonus narrowed to 2.2% from 2.3% during the same period. The British Pound gained ground following the report, with GBP/USD coming off of the 1.3100 handle to end the day at 1.3200.