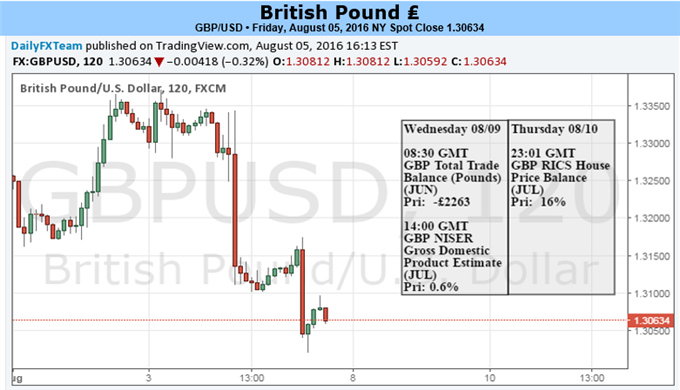 GBP/USD stands at risk of giving back the rebound from the July low (1.2788) as the Bank of England (BoE) reverts back to its easing cycle, while positive data prints coming out of the U.S. economy boosts bets for at 2016 Fed rate-hike.

The Monetary Policy Committee’s (MPC) multipronged approach (fresh record-low interest rate, a new Term Funding Scheme, GBP 10B in corporate-bond purchases along with an addition GBP 60B in government-bond purchases) to mitigate the spillover effects of ‘Brexit’ casts a bearish outlook for the sterling especially as Governor Mark Carney keeps the door open to further support the U.K. economy. Indeed, the BoE may continue to push monetary policy into unchartered territory as the central bank cuts its growth forecast and warns ‘a majority of members expect to support a further cut in Bank Rate to its effective lower bound at one of the MPC’s forthcoming meetings during the course of the year,’ but the fresh remarks from Governor Carney suggests the central bank will avoid pushing the benchmark interest rate into negative territory as the committee enlists the ‘Term Funding Scheme to reinforce the pass-through of the cut in Bank Rate.’ Despite speculation for additional monetary support, the BoE’s reluctance to implement a negative-interest rate policy (NIRP) may limit the downside risks for GBP/USD as the central bank puts a floor on borrowing-costs.

At the same time, the 255K expansion in U.S. Non-Farm Payrolls (NFP) may put increased pressure on the Federal Open Market Committee (FOMC) to further normalize monetary policy especially as the U.S. economy approaches ‘full-employment,’ and the key data prints due out next week may boost interest-rate expectations as Retail Sales are projected to increase another 0.4% in July, while the U. of Michigan Confidence survey is anticipated to rebound in August. Signs of stronger consumption may heighten the appeal of the dollar and encourage Fed officials to adopt a hawkish tone as it remains one of the leading drivers of growth and inflation, but Chair Janet Yellen may attempt to buy more time at the next quarterly policy meeting in September as the U.S. Presidential election clouds the fiscal outlook. With that said, the Fed may endorse a wait-and-see approach for the foreseeable future as the committee argues ‘market-based measures of inflation compensation remain low; most survey-based measures of longer-term inflation expectations are little changed, on balance, in recent months,’ and the dollar stands at risk of facing additional headwinds over the near-term as central bank officials largely wait for evidence of stronger inflation. 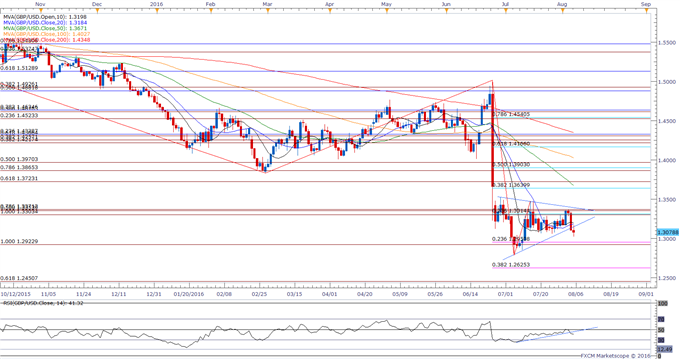 Nevertheless, the long-term downward trend in GBP/USD may reassert itself over the days ahead as the pair fails to preserve the wedge/triangle formation carried over from the previous month, and the continuation pattern foreshadows further losses for Cable especially as it carves a new series of lower highs & lows in August. With that said, the next downside region of interest comes in around 1.2920 (100% expansion) to 1.2950 (23.6% expansion), with a break of the July low (1.2788) opening up 1.2630 (38.2% expansion).