- Unemployment Rate to Advance to 5.8%- Highest Reading Since February.

Despite forecasts for an uptick in Australia’s jobless rate, another 10.0K expansion in employment may boost the appeal of the Aussie and spur a further advance in AUD/USD as it dampens market speculation for additional monetary support.

The Reserve Bank of Australia (RBA) may stick to the sidelines throughout the remainder of the year as the central bank anticipates ‘a modest pace of expansion in employment in the near term,’ and Governor Glenn Stevens may continue to endorse a wait-and-see approach at the next policy meeting on August 2 as the previous rate-cuts work their way through the real economy.

Improved confidence accompanied by the pickup in business outputs may foster a better-than-expected employment report, and a further improvement in labor market dynamics may encourage the RBA to soft its dovish tone for monetary policy as it instills an improved outlook for growth and inflation.

However, easing demand from home and abroad may prompt Australian firms to scale back on hiring, and a dismal development may produce near-term headwinds for the Aussie as it puts increased pressure on the RBA to further embark on its easing cycle. 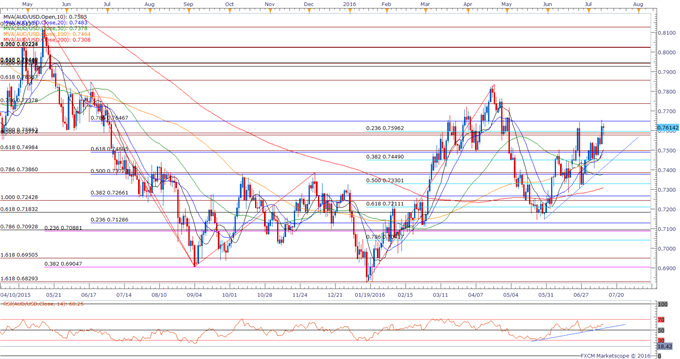 The Australian economy added another 17.9K jobs in May following a revised 0.8K expansion the month prior, while the unemployment rate held steady at an annualized 5.7% for the third consecutive month. A deeper look at the report showed part-time positions increased another 17.9K after advancing 19.1K in April, while full-time employment held flat in May after contracting 18.2K during the prior month. Despite the better-than-expected headline print, the spike higher in AUD/USD was short-lived, with the pair slipping below the 0.7400 handle to end the day at 0.7361.