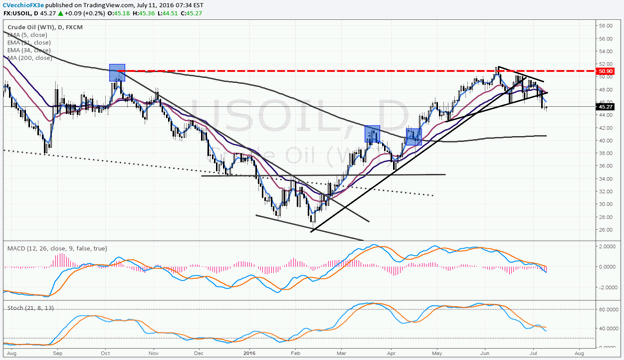 - Crude Oil's recent breakdown may cater to a stronger USD/CAD.

- Watch daily 8-EMA in GBP/JPY and GBP/USD for reversal.

In what should prove to be a few days of digestion for the US Dollar, the greenback finds itself on positive footing in the wake of the best US Nonfarm Payrolls report of the year. Of course, with the specter of Brexit looming, there's been little meaningful movement in the Fed funds futures contract, still pricing in no month with a probability in excess of 60% through the end of 2017.

So, for now, for the US Dollar, the tone may be turning more positive, but the truth is, markets are probably right in being doubtful about the Fed's ability to raise rates much further from here. If market sentiment improves, a symbolic rate hike in December may come forward. Beyond that, the Fed would be setting itself up for a credibility trap, whereby the arrival of another financial crisis - Brexit? Italian banks? - would force them to reverse their normalization process. That would be the worst case scenario for the Fed and for markets indeed.

In the meanwhile, the rebound in the greenback and overarching concern about global growth, particularly out of Europe, is tempering Crude Oil's first half rally. After clearing out $45.70 to the downside last Thursday (with a subsequent weekly close below), the technical structure has turned south.

Against this backdrop, USD/CAD, which has been driven by energy markets for the last several years, is now facing a turn higher. 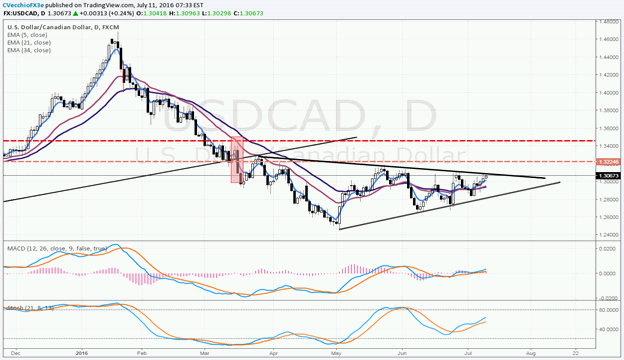 USD/CAD's momentum structure has improved meaningfully, with both daily Stochastics and MACD running higher into bullish territory. Concurrently, price has established itself about the 8-, 21-, 34-EMA envelope on the daily timeframe. Likewise, the retail trading crowd has rapidly dropped net-long positioning in the pair and is close to flipping to net-short after the last two weeks of gains. In the very short-term, it seems the odds of a move higher are increasing in USD/CAD.

See the above video for a technical review of the USDOLLAR Index, EUR/USD, USD/JPY, and why you need to be watching the daily 8-EMA in GBP/JPY and GBP/USD as your technical monitor for Brexit sentiment. If you haven't yet, read the Q3'16 Euro Forecast, "Euro Awakes to Brexit Nightmare; Time for a Turn in EUR/USD?"as well as the rest of all of DailyFX's Q3'16 quarterly forecasts.