- ISM Manufacturing Survey to Hold at Second-Highest Reading for 2016.

Even though the ISM Manufacturing survey is expected to hold steady at 51.3 in June, another unexpected uptick may heighten the appeal of the greenback and spur a short-term decline in EUR/USD as it instills an improved outlook for growth.

Positive data prints coming out of the U.S. economy may put increased pressure on the Federal Open Market Committee (FOMC) to implement a rate-hike over the coming months, but signs of a slowing recovery may force the central bank to preserve a wait-and-see approach throughout 2016 in an effort to curb the downside risks surrounding the region.

Improved confidence accompanied by the pickup in private-sector spending may encourage another uptick in the ISM survey, and a positive development may spark a bullish reaction in the greenback as it boosts interest-rate expectations.

Nevertheless, the weakening outlook for global growth paired with the decline in private investment may drag on business sentiment, and a dismal report may produce near-term headwinds for the greenback as market participants push out bets for the next Fed rate-hike. 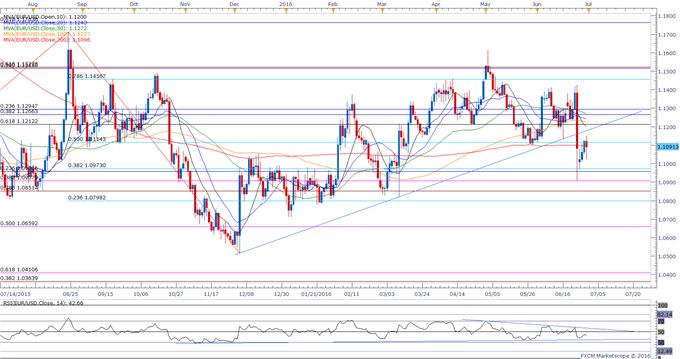 Check out the short-term technical levels that matter for NZD/USD heading into the testimony!

The ISM Manufacturing survey unexpectedly improved in May, with the index advancing to 51.3 from 50.8 the month prior. A deeper look at the report showed the Prices Paid index climbing to 63.5 from 59.0 in April, while the Employment component held steady at 49.2 to mark the sixth consecutive contraction, with the gauge for Production narrowing to 52.6 from 54.2 during the same period. The initial move lower in EUR/USD was short-lived, with EUR/USD bouncing back from the 1.1150 zone to end the day at 1.1186.