- Core Rate of Inflation to Slow for Second Time in 2016.

Despite forecasts for a rebound in Canada’s Consumer Price Index (CPI), a marked slowdown in the core rate of inflation may drag on the loonie and spark a further advance in USD/CAD as it dampens interest-rate expectations.

Even though the Bank of Canada (BoC) has turned upbeat on the economy in 2016, Governor Stephen Poloz and Co. may opt to retain the accommodative policy stance for an extended period as the central bank continues to highlight the persistent slack in the real economy.

Signs of a stronger-than-expected recovery paired higher input costs may boost consumer prices, and a pickup in the headline as well as the core rate of inflation may boost the appeal of the Canadian dollar as it puts increased pressure on the BoC to normalize monetary policy sooner rather than later.

However, Canadian firms may offer discounted prices amid easing demand at home and abroad, and a soft inflation report may produce near-term headwinds for the loonie as it fuels speculation for additional monetary support. 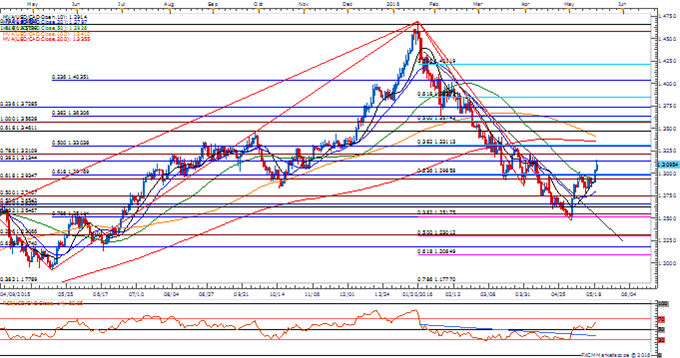 Canada’s Consumer Price Index (CPI) slowed to an annualized 1.3% from 1.4% in February, while the core rate of inflation unexpectedly advanced to 2.1% from 1.9% during the same period amid forecasts for a 1.7% print. A deeper look at the report showed prices for clothing & footwear increased 4.2% to lead the advance, with transportation costs rebound 1.3% while food costs narrowed 0.3% in March. The stronger-than-expected reading for both the headline & core rate of inflation propped up the Canadian dollar, with USD/CAD slipping below the 1.2700 handle to end the day at 1.2665.