The advance 4Q U.S. Gross Domestic Product (GDP) report may produce near-term headwinds for the greenback and fuel a larger rebound in EUR/USD as signs of a slowing recovery dampens bets for a Fed rate-hike in the first-half of 2016.

Even though the Federal Open Market Committee (FOMC) appears to be on course to further normalize monetary policy over the coming months, softer growth accompanied by a downtick in the core Personal Consumption Expenditure (PCE), the Fed’s preferred gauge for inflation, may encourage the central bank to endorse a wait-and-see approach at the next interest rate decision on March 16 in an effort to stem the downside risks surrounding the U.S. economy.

Subdued wages paired with the slowdown in private-sector consumption may spur a marked slowdown in the growth rate, and a dismal GDP report may undermine the bullish sentiment surrounding the greenback as it drags on interest rate expectations.

Nevertheless, improved confidence paired with the pickup in the housing market may provide a boost to the economy, and a positive development may heighten the appeal of the dollar as it puts increased pressure on the FOMC to implement higher borrowing-costs sooner rather than later. 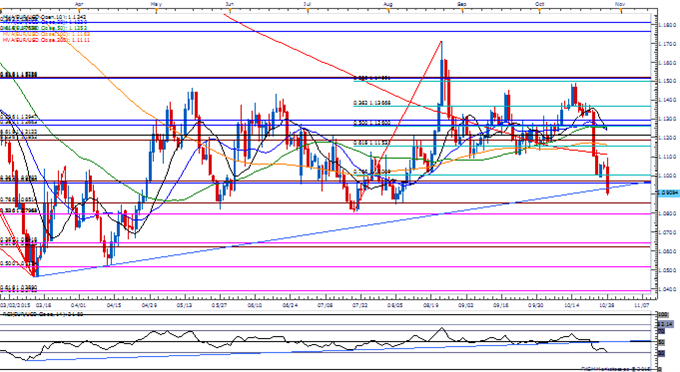 The advance 3Q Gross Domestic Product (GDP) report missed market expectations as the growth rate increased an annualized 1.5% following the 3.9% during the three-months through June. A deeper look at the report showed a similar story for Personal Consumption, with the figure showing a 3.2% advance amid forecasts for a 3.3% clip, while the core Personal Consumption Expenditure (PCE), the Fed’s preferred gauge for inflation, slowed to an annualized 1.3% versus expectations for a 1.4% reading. Despite the softer-than-expected GDP report, it seems as though the Federal Open Market Committee (FOMC) will stay on course to normalize monetary policy as Chair Janet Yellen anticipates a stronger recovery in the second-half of 2015. The initial spike in EUR/USD was short-lived as the pair worked its way down towards the 1.0925 region following the data, but the move largely unwound during the North American trade as the pair ended the day at 1.0974.