- Core Rate of Inflation to Hold at 2.0% for Second Consecutive Month.

A pickup in Canada’s Consumer Price Index (CPI) may heighten the appeal of the loonie and fuel a larger pullback in USD/CAD as it encourages the Bank of Canada (BoC) to retain a wait-and-see approach in 2016.

With the BoC largely endorsing a neutral outlook for monetary policy, it seems as though the central bank is approaching the end of its easing cycle, and signs of sticky price growth may prompt Governor Stephen Poloz to adopt a more hawkish tone over the coming months as the risks to the inflation outlook are ‘roughly balanced.’

Improved confidence accompanied by the recent pickup in private-sector spending may encourage Canadian businesses to boost consumer prices, and a marked pickup in the headline as well as core rate of inflation may pave the way for a near-term correction in the exchange rate as market participants scale back bets for a BoC rate-cut.

However, the protracted recovery may push firms may offer discounted prices amid low input costs, and an softer-than-expected inflation report may renew the bearish sentiment surrounding the loonie as market participants look for additional monetary support in Canada. 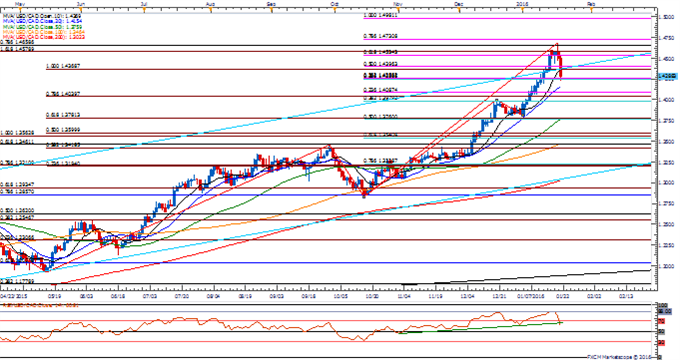 Canada’s Consumer Price Index (CPI) rose an annualized 1.4% in November after expanding 1.0% the month prior, while the core rate of inflation unexpectedly slowed to 2.0% from 2.1% during the same period. A deeper look at the report showed the cost of recreation/education slipping another 1.8% in November to lead the decline, with prices for clothing and footwear falling 0.7%, while transportation costs increased 0.4% despite weaker energy prices. Signs of easing price growth may push the Bank of Canada (BoC) to further insulate the real economy as the region emerges from a technical recession in 2015. The market reaction to the weaker-than-expected CPI print was short-lived, with USD/CAD pulling back from the 1.4000 region to end the day at 1.3957.