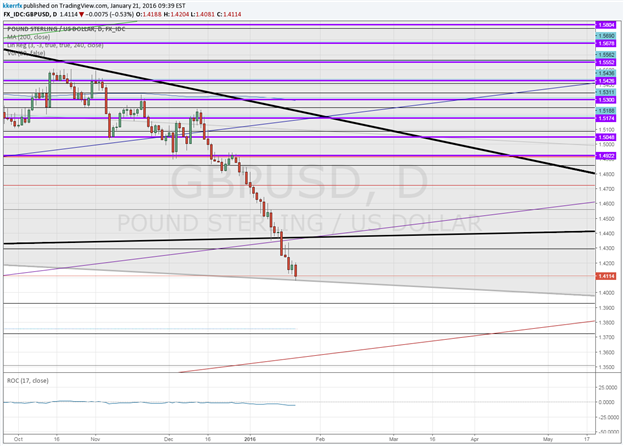 I like to say, “Trading is a much more about observation”. When I last wrote about GBP/USD, it was testing a 30-year trendline into a turn window related to the 2014 – 2015 decline. The market ‘recovered’ from this time/price support for less than two days before turning down sharply again. A market that cannot catch a bid from a deeply oversold condition against important long-term support with positive timing is clearly trying to tell us something. In the case that the downtrend in Cable remains in full force. That take was further confirmed the next day as the exchange rate did not even stall out at a seemingly important Fibonacci convergence of the 78.6% retracement of the 2009 – 2014 advance and the 61.8% projection of the 2014 – 2015 decline around 1.4300. Spot has not surprisingly continued its descent since then to trade to its lowest level in almost seven years this morning. So what now?

The problem when you get big breaks of support in any market is that everyone gets really ‘beared up’ and more times than not too much so. The sentiment picture is a concern for me here as DSI is below 10% bulls on every time frame except the monthly. Even there it is only marginally above it at 10.7% bulls as of yesterday. As I mentioned yesterday, that kind of deep and prolonged negative sentiment in a market is often times a strong sign that the market that has too many participants thinking the same thing. The problem with the pound (and a big reason sentiment has gotten so negative) is it has taken out so many important levels - so where is a rebound supposed to even materialize from? There is a real lack of anything significant until the 2008-2009 lows. Currently GBP/USD is testing the bottom of the 1-year standard deviation channel. It can act as support, but it is usually more important when other things are converging with it and in this case, I am not seeing anything relevant. Below there is the 88.7% retracement of the 2009 – 2014 advance around 1.3930, but both are dubious at best. Just to be clear I think this trend needs to be respected and until proven otherwise there is little reason to try to fight it. However, I think we probably get a decent rebound because of the extreme negative sentiment profile sooner rather than later, but only over 1.4400 would signal to me that anything of consequence is setting up on the upside.