- Household Spending to Contract for Seventh Time in 2015.

A 0.1% contraction in U.S. Retail Sales may drag on the greenback and spur a near-term advance in EUR/USD as it undermines the Fed’s scope to further normalize monetary in the first-half of 2016.

Even though the Federal Open Market Committee (FOMC) remains on course to implement higher borrowing-costs over the coming months, a marked slowdown in private-sector consumption, one of the leading drivers of growth and inflation, may encourage the central bank to endorse a wait-and-see approach at the January 27 interest rate decision as the board struggles to achieve the 2% target for price growth.

Subdued wage growth accompanied by the slowdown in private-sector lending may drag on household spending, and a dismal retail sales figure may push the Fed to adopt a more cautious outlook for the region as it points to a slowing recovery.

However, improved confidence paired with the ongoing rise in job growth may help to boost consumption, and a positive development may put increased pressure on the FOMC to implement higher borrowing-costs especially as the region approaches ‘full-employment.’ 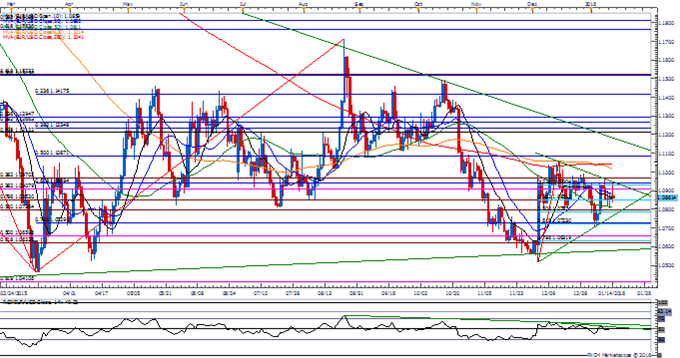 U.S. Retail Sales continued to disappoint in December, with household spending increasing 0.2% after expanding 0.1% during the month prior. A deeper look at the report showed demand for auto vehicle/parts slipped another 0.4% in December, with gasoline receipts contraction 0.8% as well, while discretionary spending on clothing increased 0.8% following the 0.5% contraction in September. Even though the Fed anticipates a stronger recovery and stays on course to normalize monetary policy, the mixed data prints coming out of the region may spur a broader dissent within the committee as Chair Janet Yellen appears to be in no rush to implement higher borrowing-costs. Despite the limited market reaction to the retail sales report, the greenback struggled to hold its ground throughout the North American trade, with EUR/USD closing the North American session at 1.0984.

The Pain of Tolerance is Withdrawal: It’s a Different World without QE