- Australia Employment to Contract for Fourth-Time in 2015.

- Jobless Rate to Increase to Annualized 5.9% From Lowest Reading Since April 2014.

A 10.0K contraction in Australia Employment accompanied by an uptick in the jobless rate may spur fresh monthly lows in AUD/USD as it puts increased pressure on the Reserve Bank of Australia (RBA) to further embark on its easing cycle in 2016.

The RBA may sound more dovish at the February 2 policy meeting should the employment report highlight a marked slowdown in job growth, and Governor Glenn Stevens may keep the door open to implement lower borrowing-costs in order to further assist with the rebalancing of the real economy.

The ongoing contraction in service-based activity accompanied by the slowdown in the housing market may drag on job growth, and a dismal employment report may spur a bearish reaction in the Australian dollar as it fuels bets for a further reduction in the RBA’s cash rate.

Nevertheless, improving demand from home and abroad may encourage Australian firms to boost their labor force, and another unexpected pickup in job growth may keep Governor Glenn Steven and Co. on the sidelines throughout 2016 as the previous rate cuts continue to work their way through the real economy. 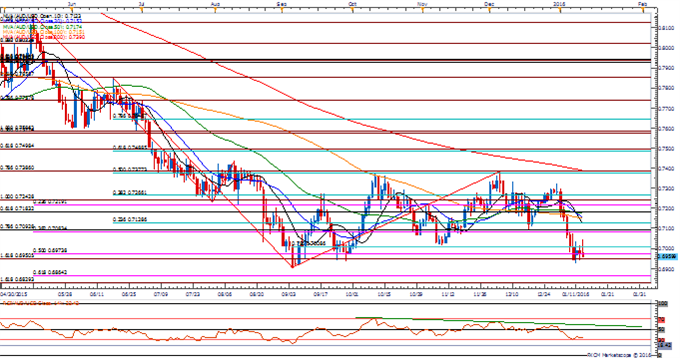 The Australian labor market continued to improve in November, with the economy unexpectedly adding another 71.4K jobs following a revised 56.1K expansion the month prior. At the same time, the Unemployment Rate slipped to a 12-month low of 5.8% even as the participation rate unexpectedly climbed to 65.3% from 65.0% in October. Despite the encouraging prints, the Reserve Bank of Australia (RBA) may keep the door open to further insulate the economy as the central bank continues to see below-trend growth over the policy horizon. Despite the better-than-expected print, the Australian Dollar struggled to retain the move above the 0.7300 handle as the pair ended the Asia-Pacific trade at 0.7287.