Upbeat BoC to Spur Larger USD/CAD Correction- All Eyes on 1.2800

- Bank of Canada (BoC) Expected to Keep Benchmark Interest Rate to Record-Low of 0.50%.

- Will Governor Stephen Poloz Highlight an Improved Outlook for Canada?

According to a Bloomberg News survey, 25 of the 26 economists polled forecast the Bank of Canada (BoC) to keep the benchmark interest at 0.50%, but a material shift in the policy outlook may boost the appeal of the Canadian dollar should the central bank sounds more upbeat this time around.

Despite the technical recession in Canada, BoC Governor Stephen Poloz may endorse an improved forecast for the region and highlight a more hawkish stance for monetary policy as ‘economic activity continues to be underpinned by solid household spending and a firm recovery in the United States.’

The BoC may be well on its way to conclude its easing cycle amid sticky price growth accompanied by the ongoing improvement in the labor market, and an upbeat policy statement may heighten demand for the Canadian dollar as it boosts interest rate expectations.

However, the ongoing adjustment in the real economy paired with concerns surrounding the housing market may push the BoC to retain a cautious outlook, and dovish comments from Governor Poloz may drag on the loonie as it spurs bets for lower borrowing-costs.

Price & Time: Do Or Die This Week For USD/CAD? 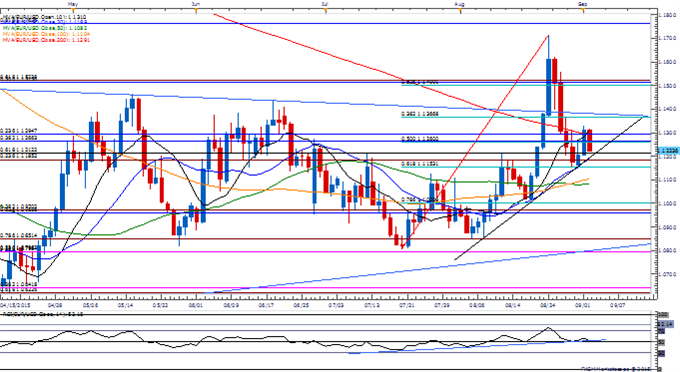 As expected, the Bank of Canada (BoC) held the benchmark rate steady at 0.50% in September, with Governor Stephen Poloz largely endorsing an upbeat outlook for the region as lower borrowing-costs work their way through the real economy. Despite the positive tone, lower commodity prices accompanied by the slowdown in global growth may encourage the central bank to carry the record-low interest rate into 2016 in an effort to further insulate the region. The spike lower in USD/CAD following the rate decision was short-lived, with USD/CAD climbing back above the 1.3200 handle to end the North American session at 1.3256.