Price & Time: Do Or Die This Week For USD/CAD?

USD/CAD: Do Or Die This Week? 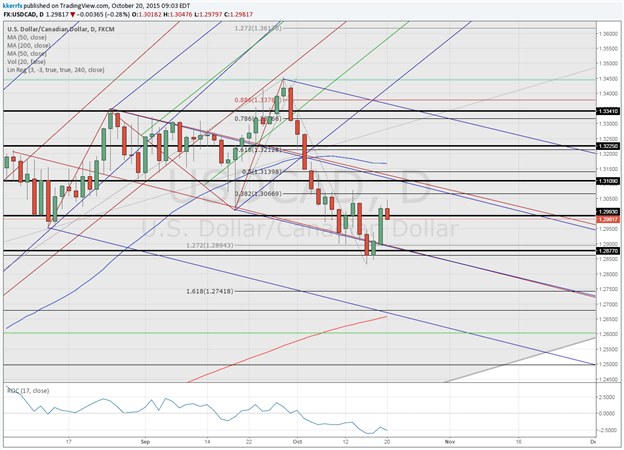 This is an important week for USD/CAD. Yesterday we had the general election and tomorrow is the Bank of Canada meeting. The exchange rate is obviously on everybody’s radar this week because of this. It is on my radar as well, but for cyclical reasons. The end of the week looks potentially important to me as a variety of different timing relationships will be converging on Thursday and Friday. I suspect how the exchange rate reacts later this week should shed a lot of light on just how important the move down from 1.3460 has really been.

Late last month USD/CAD topped out just shy of 1.3460. This was the 61.8% retracement of the all-time high recorded in 2002 and the all-time low recorded in 2007. It also marked an exact 48.6% (golden mean rhythm ratio) rise from the 2007 low completing a rare price and percentage convergence. The decline that has followed had been steady until last week where the exchange rate found support where it needed to around a confluence of the 5th square root relationship , the 38% retracement of the May – September advance and the 127% extension of the late September range between 1.2860 and 1.2895. This looks to be a pretty pivotal price point.

I suspect if the broader uptrend is going to try and reassert itself, then the latter part of the week is probably the appropriate time for it to do so. It wouldn’t surprise me see last week’s low retested or even broken before then, but the important thing is that the exchange rate starts to turn back up by early next week. Continued weakness past Friday would warn another potentially severe decline is shaping up. A recovery, on the other hand, after a final move lower into the end of the week that sees resistance near 1.3060 overcome would signal to me that the broader uptrend is indeed trying to reassert itself.