Another 10.0K expansion in Canada Employment may boost the appeal of the loonie and spur a further decline in USD/CAD as it boosts the outlook for growth and inflation.

Even though Canada remains stuck in a technical recession, data prints pointing to a more sustainable recovery may encourage the Bank of Canada (BoC) to move away from its easing cycle, and the dollar-loonie may face a larger correction in the days ahead especially as the Fed appears to be in no rush to remove its zero-interest rate policy (ZIRP).

The pickup in private-sector activity may encourage firms to expand their labor force, and a further expansion in hiring may spark a bullish reaction in the Canadian dollar as it curbs the BoC’s scope to introduce additional rate cuts.

Nevertheless, waning demand from home and abroad may drag on job growth, and an dismal employment report may trigger a near-term bottoming process in the exchange rate as it raises the risk of seeing lower borrowing-costs in Canada. 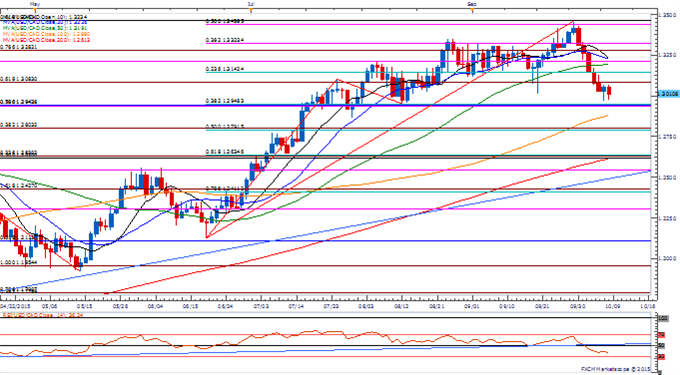 Canada unexpectedly added another 12.0K jobs in August following the 6.6K expansion the month prior. At the same time, the unemployment rate rose to an annualized rate of 7.0% from 6.8% as discouraged workers returned to the labor force, with the participation rate climbing to 65.9% from 65.7% in July. The better-than-expected employment report may highlight an improved outlook for the region as the Bank of Canada (BoC) sees the region emerging from the technical recession later this year, and we may see Governor Stephen Poloz endorse a wait-and-see approach throughout the remainder of the year as the central bank head turns increasingly upbeat on the economy. Despite the better-than-expected job increase, the bullish reaction in the Canadian dollar was short-lived, with USD/CAD climbing above the 1.3250 region to end the day at 1.3276.