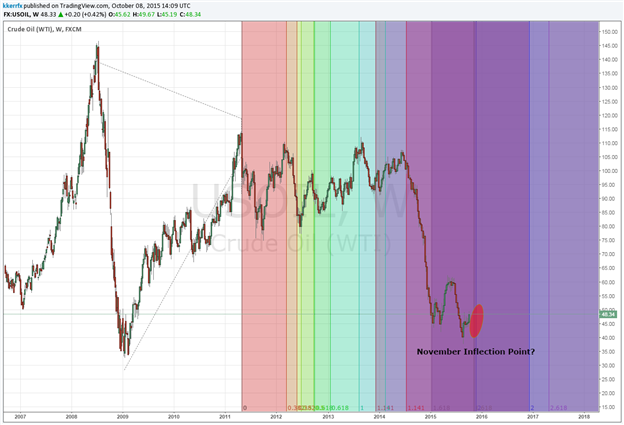 Over the years crude has responded very well to key points of time symmetry. The high in June of 2014 is a great example as it occurred almost exactly at the 61.8% retracement of the time elapsed between the 1998 low and the 2008 high. It was also almost exactly 3.14 years from the high in May of 2011 which is a variation of the Armstrong Pi cycle. The high in 2014 obviously caught many people off guard as sentiment at the time was extremely positive on the commodity and the industry were ramping up for an eventual push back towards the 2008 highs. Instead we got a 65% collapse in the price of crude over the proceeding 14-months. I remember writing about the possibility of a decline (read HERE) around that time and getting some intense hate mail.

We seem to be nearing another potentially important inflection point in the 4th quarter of 2015 as November marks 161.8% of the time elapsed between the 2008 and 2011 highs and the 200% extension in time of the 2009 – 2011 advance. There are some other relationships as well, but those are probably the most important. Unlike in 2014, sentiment isn’t really that lopsided. The rally off the August lows has many thinking we have seen the “big” bottom and the commodity is now ready to rally aggressively. Others liken it to the broadband bust of the early 2000’s and argue low prices are here to stay for a long time. So in my view it is pretty evenly split heading into next month. If we do get an aggressive rally into the turn window I will probably be looking to fade it and vice versa on a sharp decline. I reckon whatever does happen into this key timing period it should lead to the next important trend in oil. I will write more about it as it approaches.