- Core Rate of Inflation to Uptick to Annualized 0.9% From the Lowest Level Since March 2001.

Even though the headline reading for the U.K. Consumer Price Index (CPI) is expected to hold flat for the second consecutive month, an uptick in the core rate of inflation may spur a near-term breakout in GBP/USD as its puts increased pressure on the Bank of England (BoE) to normalize monetary policy sooner rather than later.

Signs of strong price growth may encourage a greater dissent within the Monetary Policy Committee (MPC) following the 8-1 split at the August 6 interest rate decision, and the BoE may continue to prepare U.K. households and businesses for higher borrowing-costs as Governor Mark Carney pledges to achieve the 2% inflation target over the policy horizon.

Stronger wage growth paired with the pickup in private-sector credit may boost consumer prices, and a strong CPI print may heighten the bullish sentiment surrounding the British Pound as it fuels speculation for higher borrowing-costs in the U.K.

However, U.K. firms may offer discounted prices amid lower input costs coupled with the slowdown in consumption, and a weak inflation report may drag on interest rate expectations as the majority of the BoE continues to endorse a wait-and-see approach. 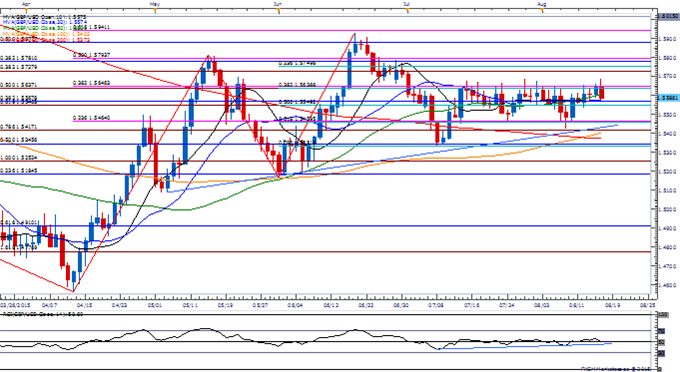 The U.K. Consumer Price Index (CPI) held flat in June after increasing an annualized 0.1% the month prior, while the core inflation rate unexpectedly shrank to a 14-year low of 0.8% from 0.9% during the same period. Even though Bank of England (BoE) Governor Mark Carney continues to prepare U.K. households and businesses for higher borrowing-costs, subdued consumer price growth may encourage the central bank to retain its wait-and-see approach throughout 2015 in an effort to encourage a stronger recovery. Despite the weaker-than-expected CPI print, the market reaction was largely limited as the BoE was scheduled to testify in front of Parliament later in the day, with the pair rallying into the 1.5600 handle following the fresh batch of central bank rhetoric to end the day at 1.5634.