- Jobless Rate to Uptick for Second Month to Annualized Rate of 6.1%.

Another 10.0K expansion in Australia Employment may pave the way for a more meaningful rebound in AUD/USD as signs of a stronger recovery dampens the Reserve Bank of Australia’s (RBA) scope to further embark on its easing cycle.

The RBA may largely retain its current policy stance throughout 2015 as the central bank turns upbeat towards the economy, and we may see Governor Glenn Stevens continue to soften the verbal intervention on the local currency as the outlook for growth and inflation improves.

Improved business confidence along with the pickup in private-sector consumption may foster a better-than-expected employment report, and a marked expansion in job growth may heighten the appeal of the aussie as market participants scale back bets for lower borrowing-costs.

Nevertheless, the ongoing slack in the real economy may drag on the labor market, and a dismal employment print may undermine the near-term rebound in AUD/USD as it raises the risk of seeing another RBA rate cut. 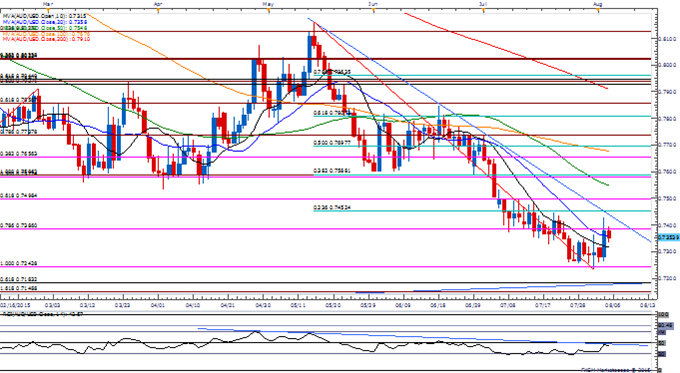 Australia’s Employment report topped market forecasts as the economy added another 7.3K jobs in June following the 40.0K expansion the month prior. At the same time, the jobless rate up ticked to an annualized rate of 6.0% from a revised 5.9% during the same period, which was accompanied by an increase in the Labor Participation Rate as the figure widened to 64.8% from 64.7% in May. Following the Reserve Bank of Australia (RBA) rate cut at the May 5 meeting, signs of a stronger recovery may encourage the central bank to retain a wait-and-see approach throughout 2015 as the benchmark interest rate sits at the record-low. The Australian dollar traded higher following the better-than-expected report, with AUD/USD climbing above the 0.7450 region, but the pair struggled to hold its ground as it ended the day at 0.7443.