- Annualized 2.5% Expansion in Australia 4Q GDP Would Mark the Slowest Rate of Growth for 2014.

The rebound in AUD/USD following the Reserve Bank of Australia (RBA) interest rate decision may quickly unravel should the 4Q Gross Domestic Product (GDP) report heighten bets for another rate cut in the first-half of 2015.

Despite the range-bound price action in AUD/USD, a marked slowdown in the annualized growth figure may fuel bets for lower borrowing-costs and spur a more meaningful move back towards the February low (0.7625) as RBA Governor Glenn Stevens endorses a highly dovish forward-guidance for monetary policy.

Waning business confidence along with slowdown in investments may heighten the bearish sentiment surrounding the Australian dollar, and the range-bound price in AUD/USD may ultimately give way as market participants anticipate the RBA to further embark on its easing cycle.

However, the pickup in household spending and building activity may encourage an upbeat GDP print, and a faster rate of growth may limit the RBA’s scope to offer lower borrowing-costs as the economy gets on a firmer footing.

Price & Time: Downside Break in the Euro Before Payrolls? 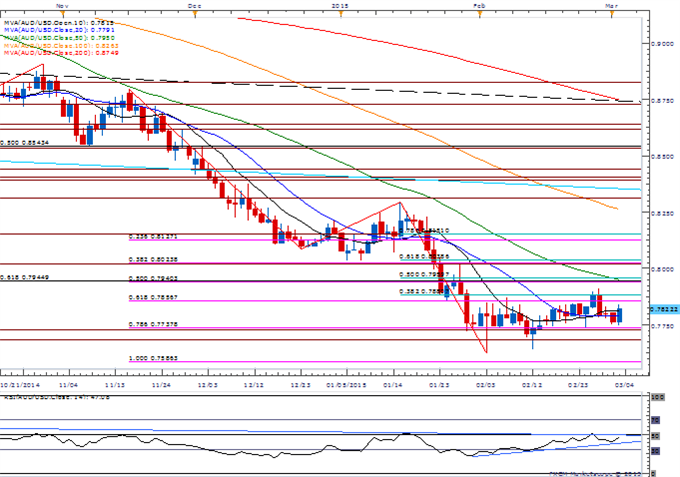 The Australia economy grew another annualized 2.7% during the three-months through September following a downward revision to the 3Q GDP figures. The slowdown was largely driven by sliding commodity prices along with a decline in fixed investment. The slowing recovery may put increased pressure on the the Reserve Bank of Australia (RBA) to further assist with the rebalancing of the real economy amid the weakening outlook for global growth. The disappointing GDP prints dragged on the Australian Dollar, with AUD/USD slipping below the 0.8400 handle before ending the day at 0.8407.