A marked downward revision in the U.S. growth rate may generate a short-term rebound in EUR/USD should the preliminary 4Q Gross Domestic Product (GDP) report dampen bets for a mid-2015 Fed rate hike.

Despite bets for higher borrowing-costs, further weakness in the core Personal Consumption Expenditure (PCE), the Fed’s preferred gauge for inflation, may push Chair Janet Yellen to endorse a wait-and-see approach and further delay the normalization cycle as the central bank struggles to achieve the 2% target for price growth.

Waning household and business confidence along with the slowdown in private spending may drag on the growth rate, and a dismal print may spur a bullish reaction in EUR/USD as it limits the Fed’s scope to normalize monetary policy sooner rather than later.

Nevertheless, the uptick in private wages paired with the ongoing improvement in the labor market may foster a better-than-expected GDP report, and bets for a stronger recovery may heighten the bullish sentiment surrounding the U.S. dollar as the Fed remains on course to remove the zero-interest rate policy (ZIRP) over the near to medium-term. 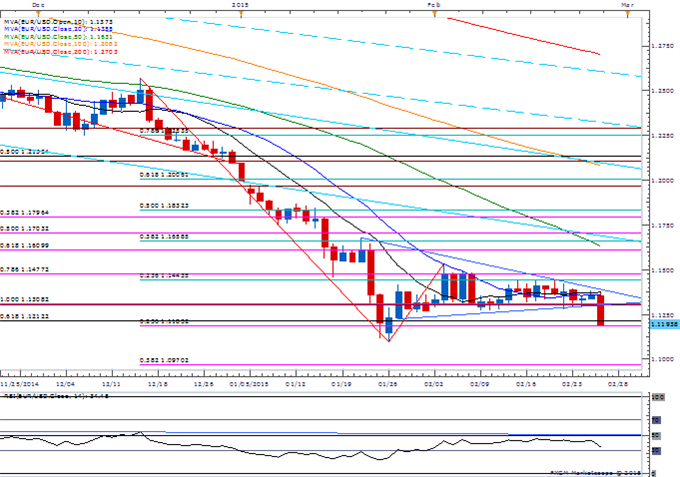 The preliminary 3Q U.S. GDP report showed an unexpected upward revision in the growth rate, with the economy expanding an annualized 3.9% amid an initial forecast for a 3.5% clip. Personal Consumption also increased more than initially expected as the figure climbed 2.2% during the same period, while the core Personal Consumption Expenditure (PCE), the Fed’s preferred gauge for inflation, narrowed to an annualized 1.4% from 2.1% in the third-quarter. Despite the improved outlook for growth, the disinflationary environment may push the Fed to retain its highly accommodative policy stance for an extended period of time as it struggles to achieve the 2% target for inflation. The market reaction following the better-than-expected figures was short-lived as EUR/USD climbed back above the 1.2425 region to end the day at 1.2473.