- Core Rate of Inflation to Hold at 1.6% for Second-Month.

The U.S. Consumer Price Index (CPI) may trigger a more meaningful correction in the greenback and spark a larger rebound in EUR/USD as the headline reading is expected to decline an annualized 0.1% in January to mark the first contraction since 2009.

However, the stickiness in the core rate of inflation may keep the dollar afloat and encourage Fed policy makers to move towards a mid-2015 rate hike as Chair Janet Yellen sees lower energy having a positive impact on the real economy.

Waning confidence paired with the slowdown in household spending may encourage U.S. firms to further discount consumer prices, and a sharp decline in the CPI may undermine the bullish sentiment surrounding the dollar as it raises the Fed’s scope to retain the zero-interest rate policy beyond mid-2015.

Nevertheless, businesses may scale back on discounting amid the ongoing improvement in job/wage growth, and a better-than-expected CPI print may generate a bearish break in EUR/USD as it fuels interest rate expectations. 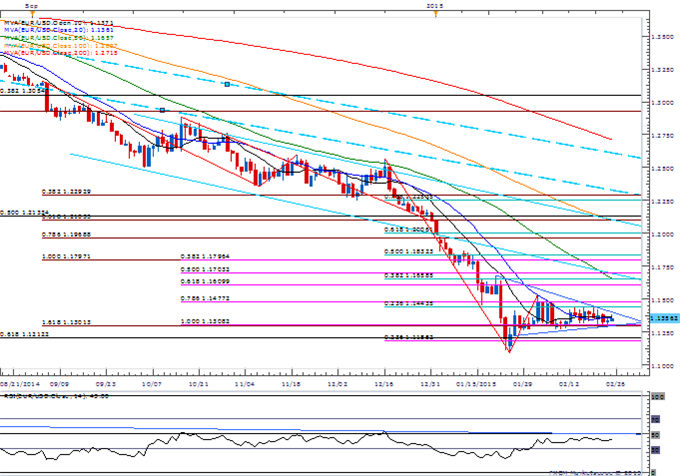 The U.S. Consumer Price Index (CPI) reached the lowest level since October 2009 as the headline reading narrowed to an annualized rate of 0.8% in December from 1.3% the month prior, largely driven by lower energy prices. At the same time, the core inflation unexpectedly slowed to 1.6% from 1.7% during the same period. Even though the Fed anticipates low energy prices to be a net positive to the U.S. economy, the disinflationary environment may push the Fed to further delay its normalization cycle as the central bank struggles to achieve its 2% target for price growth. Nevertheless, the greenback strengthened following the better-than-expected CPI print, with EUR/USD dipping below the 1.1500 handle, but the pair consolidated following the European close to end the day at 1.1157.