- Wage Growth to Expand an Annualized 1.7% for Second Straight Month.

Another 25.0K contraction in U.K. Jobless Claims may encourage an improved outlook for the real economy, but the lack of stronger wage growth may generate a limited market reaction in GBP/USD as the Bank of England (BoE) remains in no rush to normalize monetary policy.

As a result, the BoE may retain a wait-and-see approach throughout the first-half of 2015, and we may continue to see a unanimous vote to preserve the current policy until there’s a sharp rise in household earnings.

Improved confidence paired with the resilience in private consumption may generate a stronger-than-expected job/wage growth report, and a positive development may spur a bullish reaction in GBP/USD as it boosts interest rate expectations.

However, waning business outputs along with the slowdown in building activity may drag on hiring, and a dismal employment report may trigger a near-term pullback in the British Pound as it raises the BoE’s scope to retain the highly accommodative policy stance for an extended period of time. 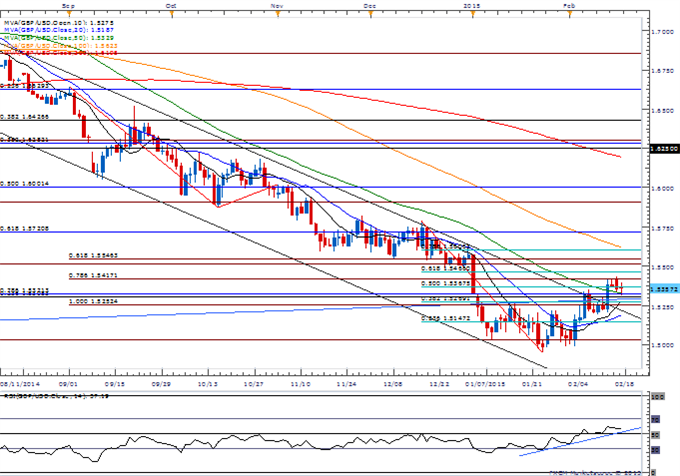 U.K. Jobless Claims fell more-than-expected as the figure shrank another 29.7K in December, while the ILO Unemployment Rate declined to a 6-year low of 5.8% during the three-months through November. Wage growth outpaced the headline reading for inflation, with Average Weekly Earnings expanding an annualized 1.7% during the same period. Despite the ongoing improvement in the labor market, it seems as though the Bank of England (BoE) will preserve its neutral stance as the central bank curbs its near-term outlook for inflation. Nevertheless, the better-than-expected print failed to spur a meaningful reaction in GBP/USD, with the pair largely advancing during the North American trade to end the day at 1.6480.