Another contraction in U.S. Retail Sales may drag on the greenback and generate a near-term rebound in EUR/USD as it dampens the Fed’s scope to raise the benchmark interest rate in mid-2015.

The Fed may have little choice but to further delay its normalization cycle as lower energy costs show little evidence of boosting private-sector consumption, and we may see the central bank implement a more dovish twist to the forward-guidance for monetary policy as it struggles to achieve the 2% target for inflation.

The ongoing slowdown in private-sector lending may weigh on household consumption, and a dismal retail sales report may undermine the bullish sentiment surrounding the dollar as it drags on interest rate expectations.

Nevertheless, the pickup in job/wage growth may pave the way for a better-than-expected print, and a positive development may spark a bearish reaction in EUR/USD as market participants ramp up bets for higher borrowing-costs. 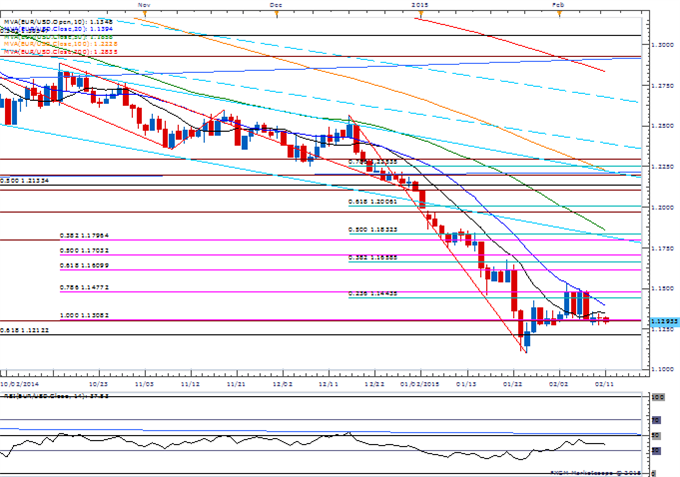 U.S. Retail Sales contracted 0.9% in December, largely driven by lower gas receipts, after climbing a revised 0.4% the month prior. Despite the worse-than-expected print, it seems as though the Fed remains confident in raising the benchmark interest rate in mid-2015 as the central bank anticipates falling oil prices to have a positive impact on the economy as it boosts disposable incomes. Nevertheless, the dollar struggled to hold its ground following the print, with EUR/USD climbing above the 1.1825 region, but the market reaction was short-lived as the pair consolidated throughout the North America trade to end the day at 1.1773.