A slowdown in Canada’s Consumer Price Index (CPI) may spur fresh monthly highs in USD/CAD especially as the Bank of Canada (BoC) reverts back to its easing cycle.

After unexpectedly cutting the benchmark interest rate at the January 21 meeting, a marked slowdown in Canada price growth may put increased pressure on the BoC to further reduce borrowing costs, and the Canadian dollar remains at risk of facing more headwinds over the near to medium-term as Governor Stephen Poloz keeps the door open to implement additional monetary support.

Waning business sentiment paired with falling input costs may continue to drag on consumer prices, and a marked slowdown in price growth may fuel bets for another rate cut as the BoC adopts a highly dovish tone for monetary policy.

Nevertheless, the pickup in economic activity may generate a stronger-than-expected CPI print, and an uptick in the core rate of inflation may spur a near-term correction in USD/CAD as the stickiness limits the BoC’s scope to further reduce the benchmark interest rate. 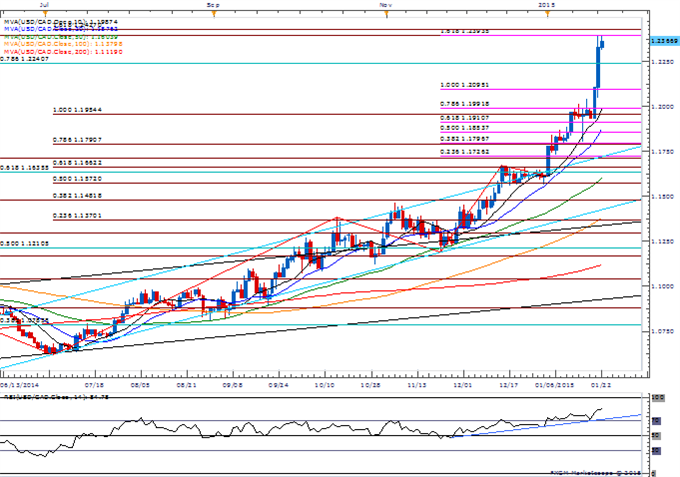 GBPAUD Pulling Back Towards Support

Canada’s Consumer Price Index (CPI) slowed to an annualized rate of 2.0% in November from 2.4% the month prior, while the core rate of inflation slipped to 2.1% from 2.3% during the same period. Indeed, falling energy prices attributed to a 1.7% decline in transportation costs, but we may see Canadian firms continue to offer discounted prices in an effort to draw greater demand. As a result, the Bank of Canada (BoC) may further delay normalizing monetary policy, and Governor Stephen Poloz may continue to endorse the accommodative policy stance over the near to medium-term in order to encourage a stronger recovery. The market reaction was short-lived as USD/CAD quickly slipped back below the 1.1625 region, and the pair continued to consolidate throughout the North American trade as it ended the day at 1.1602.