- Wage Growth to Pick Up for Fifth Month to Annualized Rate of 1.7%.

Another 25.0K contraction in U.K. Jobless Claims paired with an uptick in wage growth may spark a larger rebound in GBP/USD as it raises the Bank of England’s (BoE) scope to normalize monetary policy in 2015.

Despite bets of seeing another 7-2 split within the Monetary Policy Committee (MPC), BoE Governor Mark Carney may continue to prepare U.K. households and businesses for higher borrowing costs as the ongoing improvement in the labor market fuels expectations for a faster recovery.

Lower input costs paired with the expansion in private sector consumption may prompt U.K. firms to expand their labor force, and a slew of positive developments may heighten the appeal of the British Pound as it raises the outlook for growth and inflation.

However, the slowdown in business output may drag on the U.K. labor market, and the BoE may look to further delay normalizing monetary policy as the majority of the MPC remains in no rush to raise the benchmark interest rate off of the record-low. 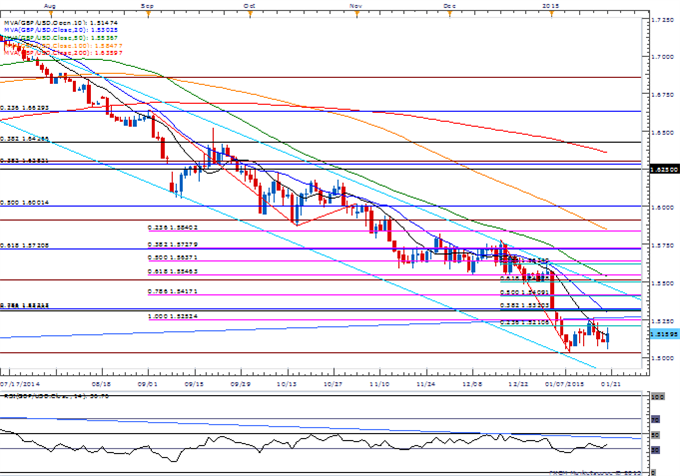 Impact that the U.K. Employment Change has had on GBP during the last release

U.K. Jobless Claims declined another 26.9K in November following a 25.1K contraction the month prior, while the ILO Unemployment Rate held steady at an annualized 6.0% for the third consecutive month. Wage growth also picked up to an annualized rate of 1.4% during the same period to mark the fourth straight rise. Despite the ongoing improvement in the labor market, it seems as though the Bank of England (BoE) remains in no rush to normalize monetary policy as the central bank struggles to achieve the 2% target for inflation. The bullish reaction in GBP/USD was short-lived as the pair pulled back towards the 1.5700 handle, and the sterling continued to lose ground throughout the North American trade as the pair ended the day at 1.5572.