A contraction in U.S. Retail Sales may dampen the appeal of the greenback and generate a more meaningful rebound in EUR/USD as it dampens bets of seeing the Federal Reserve normalize monetary ahead of schedule.

Despite expectations for a rate hike in mid-2015, the Fed may further delay normalizing monetary policy as it struggles to achieve its 2% target for inflation, and the central bank may retain the highly accommodative stance for an extended period of time in order to encourage a stronger recovery.

Subdued wage growth paired with slowdown in consumer credit may drag on private sector consumption, and a dismal sales report may trigger a larger correction in the U.S. dollar as it curbs the outlook for growth and inflation.

Nevertheless, easing energy prices paired with the ongoing improvement in the labor market may prop up household spending, and a positive print may fuel a further decline in EUR/USD as it boosts interest rate expectations. 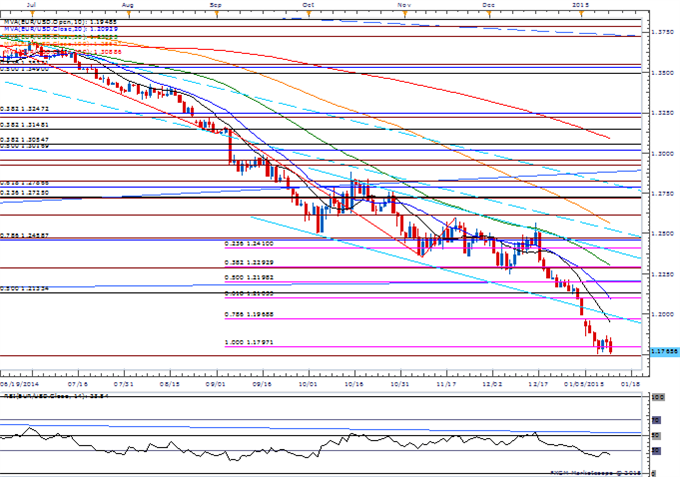 EUR/USD June-October Line is of Interest for a Low

U.S. Retail Sales advanced another 0.7% in November after climbing a revised 0.5% the month prior. Increased demand for building materials, motor vehicles and clothing contributed to the second consecutive rise in private-sector consumption. Indeed, the pickup in household spending may encourage the Fed to normalize monetary policy sooner than later as consumer spending remains one of the leading drives of growth for the U.S. economy. The better-than-expected print pushed EUR/USD down towards 1.2375 during the North American trade, but the pair bounced back going into the European close to end the day at 1.2395.