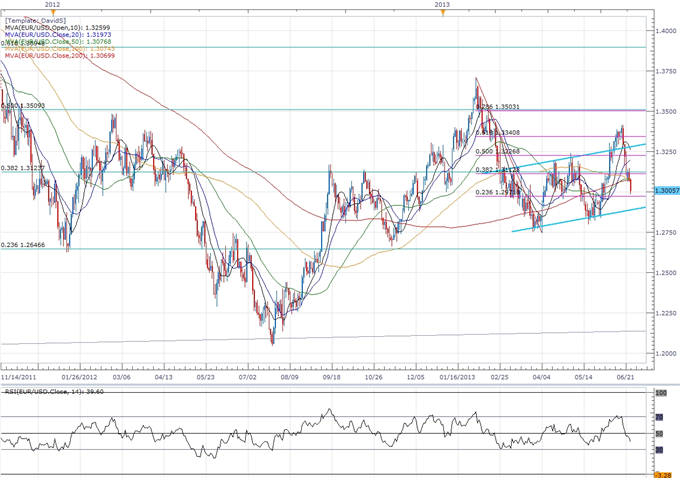 Unemployment in Europe’s largest economy is expected to increase another 8K in June, and the ongoing weakness in the labor market may prompt the European Central Bank (ECB) to further embark on its easing cycle as it dampens the outlook for growth and inflation. Indeed, it seems as though the ECB will implement more non-standard measures over the coming months as the euro-area remains mired in recession, and President Mario Draghi may endorse a negative interest rate policy for the monetary union in an effort to encourage lending to small and medium-sized enterprises (SME).

The uptick in business confidence along with the pickup in global trade may limit the rise in unemployment, and a better-than-expected print may dampen speculation for more ECB support as the central bank sees the euro-area returning to growth later this year. However, rising labor costs paired with slowing demands may push firms to scale back on hiring, and a dismal development may drag on the Euro as it fuels speculation for further rate cuts from the central bank.

As the near-term correction in the EURUSD continues to take shape, another rise in German unemployment may trigger a break below the 23.6% Fibonacci retracement around 1.2970, and we may see the euro-dollar threaten the upward trend from earlier this year should the data fuel speculation for additional monetary support. However, as the EU Summit takes center stage, we may see a limited reaction to the jobs report, and the headlines coming out of the meeting may play a greater role in driving price action for the EURUSD as the group of European policy makers look to utilize the European Stability Mechanism (ESM) to recapitalize commercial banks.

Expectations for fifth consecutive rise in unemployment certainly casts a bearish outlook for the single currency, but a positive development may pave the way for a long Euro trade as it dampens bets for more monetary support. As a result, if the print tops market expectations, we will need to see a green, five-minute candle following the release to generate a long entry on two-lots of EURUSD. Once these conditions are met, we will set the initial stop at the nearby swing low or a reasonable distance from the entry, and this risk will establish our first target. The second objective will be based on discretion, and we will move the stop on the second lot to cost once the first trade hits its mark in order to preserve our profits.

In contrast, the ongoing slack in the real economy may continue to drag on job growth as businesses face slowing demands, and the report may highlight a weakening outlook for the region as the euro-area struggles to return to growth. As a result, if unemployment climbs 8K or more in June, we will implement the same strategy for a short euro-dollar trade as the long position mentioned above, just in reverse.

Unemployment in Germany increased another 21K in May following a revised 6K rise the month prior, while the jobless rate held steady at 6.9% for the eighth consecutive month. Despite the dismal print, the Euro pared the decline from the previous day, with the EURUSD pushing above the 1.2875 handle, and the single currency gained ground throughout the day as the pair closed at 1.2938.