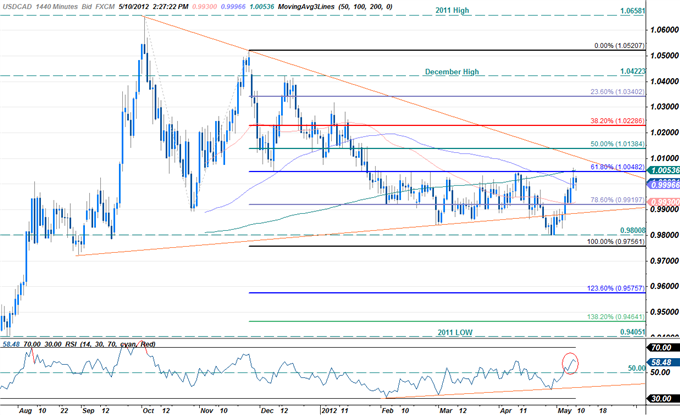 Canada is expected to add another 10.0K jobs in April and the ongoing improvement in the labor market may spark a short-term reversal in the USDCAD as it raises the scope for a rate hike. Indeed, the Bank of Canada is talking up expectations for higher borrowing costs in an effort to address the record rise in household indebtedness, but we may see the central bank normalize monetary policy throughout the second-half of the year as the economic recovery gathers pace. However, as Governor Mark Carney continues to highlight the risks surrounding the region, it seems as though the BoC will refrain from embarking on a series of rate hikes, and the central bank may continue to strike a balanced tone for the region as the marked appreciation in the local currency as it dampens the outlook for the region.

The marked expansion in the housing market paired with the rise in building activity certainly bodes well for employment, and an above-forecast print could lead the USDCAD to give back the rebound from earlier this month as market participants increase bets for a rate hike. However, the slowdown in business spending paired with the drop in private sector consumption may lead firms to scale back on hiring, and the BoC may continue to sit on the sidelines in an effort to encourage a sustainable recovery. In turn, a dismal employment report could spark another run at 1.0050, and we may see the pair threaten the range-bounce price action from earlier this year as it dampens expectations for higher borrowing costs.

A look at the USDCAD sees the pair holding just below the confluence of the 61.8% Fibonacci extension taken from the October 4th and November 25th crests and the 200-day moving average at 1.0050. This level has offered clear resistance since January 26th with every test of the extension being met by strong pullbacks in the exchange rate. As such, we reserve this level as our topside limit which if breached risks substantial losses for the loonie and offers clarity on a directional bias. Such a scenario eyes subsequent topside targets at trendline resistance dating back to the October highs at the 1.01-figure and the 50% extension at 1.0140. Daily support rests with the 78.6% extension at 9920 and is backed by trendline support dating back to August 31st, currently around 9885. 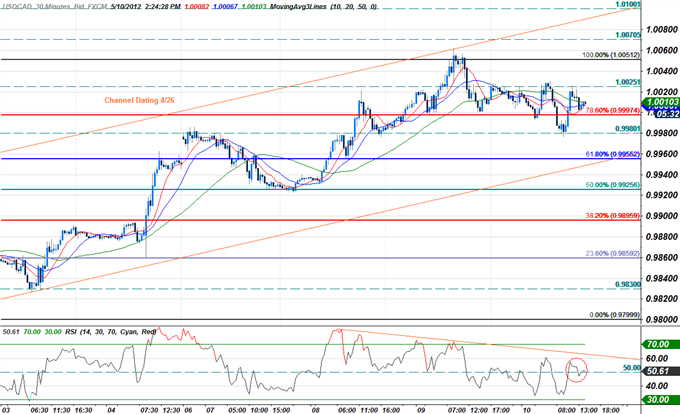 Our scalp chart shows the USDCAD trading within the confines of an ascending channel formation dating back to April 26th with the pair holding just above the 78.6% Fibonacci retracement taken form the Mid-April decline at parity. Subsequent floors are seen lower at 9980 and at the confluence of channel support and the 61.8% retracement at 9955. A break below this level risks further dollar losses with targets seen at 9925 and the 38.2% extension at 9895. Interim topside resistance stands at 1.0025 backed by the 100% retracement at 1.0050. As noted above, this level remains paramount for the dollar with a breach above eyeing targets at 1.0070, the 1.01-figure, and 1.0130. Should the print prompt a bullish loonie response look to target downside levels with a breach below 9920 targeting subsequent support targets.

Forecasts for a 10.0K rise in employment certainly instills a bullish outlook for the loonie, and a positive development could pave the way for a long Canadian dollar trade as it raises the prospects for higher interest rates. Therefore, if the report comes in-line or tops market expectations, we will need to see a red, five-minute candle following the release to generate a sell entry on two-lots of USDCAD. Once these conditions are fulfilled, we will set the initial stop the nearby swing high or a reasonable distance from the entry, and this risk will establish our first objective. The second target will be based on discretion, and we will move the stop on the second lot to cost once the first trade hits its mark in order to lock-in our profits.

In contrast, the ongoing weakness in the real economy paired with the slowdown in private sector consumption may drag on hiring, and a dismal labor report could ultimately spark a bullish breakout in the exchange rate as it curbs speculation for a rate hike. As a result, if the report falls short of forecast, we will implement the same setup for a long dollar-loonie trade as the short position mentioned above, just in reserve. 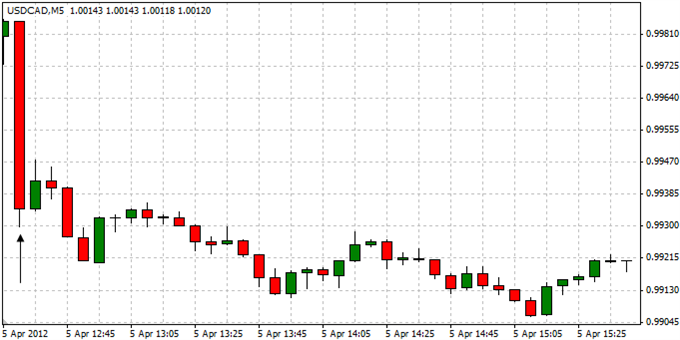 The Canadian dollar rallied against its U.S. counterpart as the region added a whopping 82.3K jobs in March to mark the biggest advance since September 2008, while the jobless rate unexpectedly narrowed to 7.2% from 7.4% during the same period. Indeed, the surge in employment pushed the USDCAD back towards 0.9900, but we saw the dollar-loonie consolidate throughout the North American trade as the exchange rate closed at 0.9928.