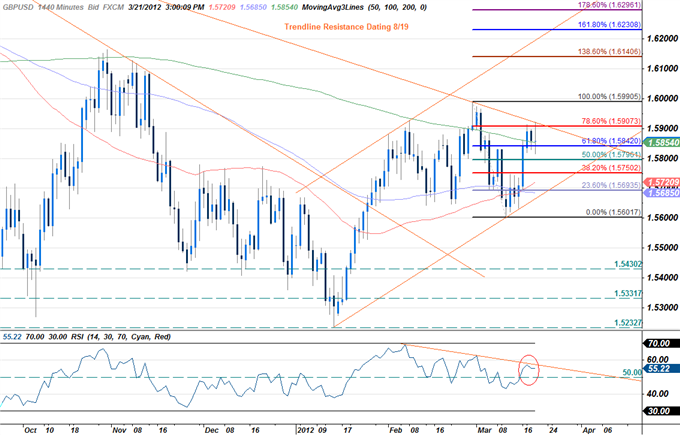 U.K. retail sales are projected to fall 0.5% in February after expanding 1.2% in the previous month, and the slowdown in private sector consumption may drag on the British Pound as it dampens the outlook for growth. As Bank of England board members David Miles and Adam Posen push for more quantitative easing, fears of a protracted recovery may lead the Monetary Policy Committee to extend its easing cycle, but an above-forecast print would curb speculation for more easing as central bank officials raise their fundamental assessment for the region.

The resilience in private sector consumption paired with expectations for a more robust recovery may generate a strong retail sales report, and an above-forecast print could spark another run at 1.6000 as market participants scale back speculation for additional monetary support. However, subdued wage growth paired with the ongoing weakness in the labor market may weigh on household consumption, and the BoE may keep the door open to expand monetary policy further as it aims to encourage a stronger recovery. In turn, a weak sales figure may lead the GBPUSD to give back the advance from earlier this month, and we may see the pair fall back towards 1.5600 to test for near-term support.

A look at the encompassing structure sees the sterling trading within the confines of a broad ascending channel formation dating back to the January 13th lows before encountering strong resistance at the confluence of the 78.6% Fibonacci retracement taken from the February 29th decline and trendline resistance dating back to September 19th just above the 1.59-figure. Daily support rests with the 200-day moving average with the 61.8% retracement at 1.5840 offering additional support. Note that RSI remains below trendline resistance dating back to February 7th with a breach above this level likely to alleviate the recent downside pressure on the pound. 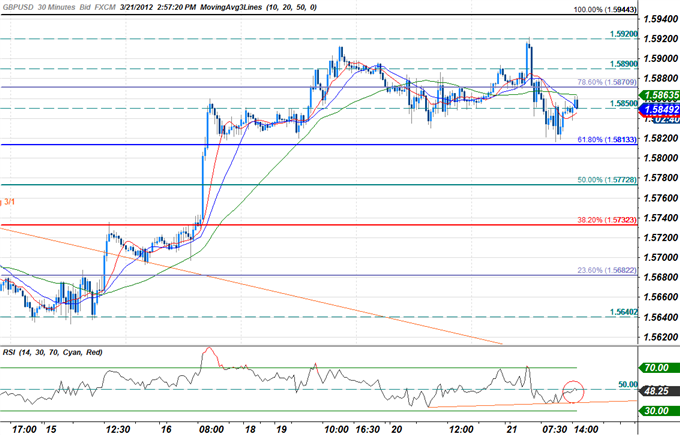 Expectations for a drop in retail sales instills a bearish outlook for the sterling, but an above-forecast print could pave the way for a long British Pound trade as the data dampens expectations for more monetary easing. Therefore, if the report tops forecasts or unexpectedly increases from the previous month, we will need to see a green, five-minute candle following the release to establish a buy entry on two-lots of GBPUSD. Once these conditions are met, we will set the initial stop at the nearby swing low or a reasonable distance from the entry, and this risk will generate our first target. The second objective will be based on discretion, and we will move the stop on the second lot to cost once the first trade hits its mark in order to protect our profits.

On the other hand, the ongoing slack within the private sector paired with the stickiness in consumer prices may drag on consumption, and a dismal sales report could spark a selloff in the exchange rate as it raises speculation for additional monetary support. As a result, should retail spending fall short of market expectation, we will implement the same strategy for a short pound-dollar trade as the long position mentioned above, just in the opposite direction.

Impact that U.K. Retail Sales has had on GBP during the last month 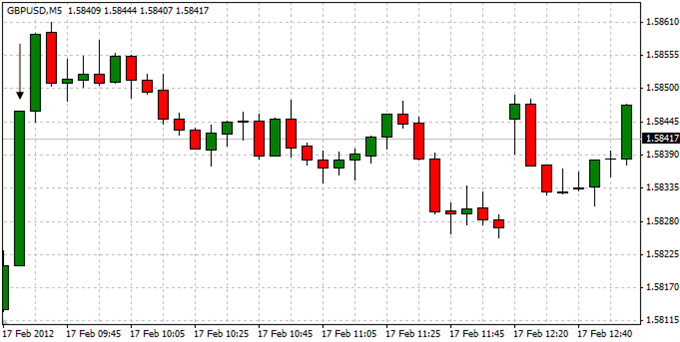 Household consumption in the U.K. unexpectedly increased 1.2% after expanding 0.6% in December as businesses continued to conduct heavy discounting in order to draw demands. The ongoing improvement in private sector consumption propped up the British Pound, with the GBPUSD climbing back above 1.5850, but we saw the sterling consolidate during the North American to end the session at 1.5825.