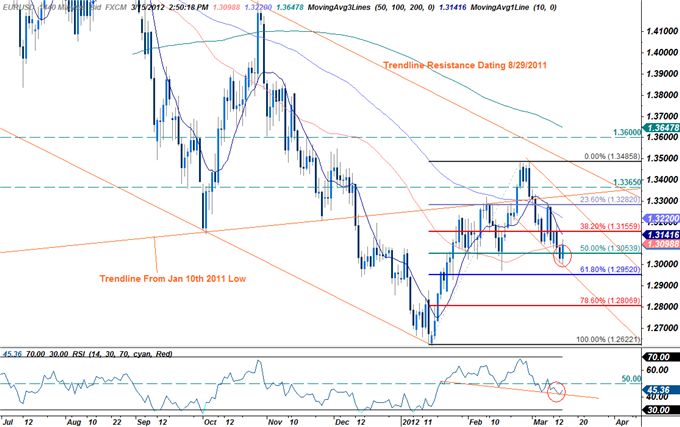 Consumer prices in the world’s largest economy are expected to expand 2.9% for the second consecutive month in February, and the stickiness in inflation may spur a bullish reaction in the U.S. dollar as the development dampens speculation for another round of quantitative easing. As the Federal Reserve takes note of the more robust recovery, we should see Chairman Ben Bernanke continue to soften his dovish tone for monetary policy, and the central bank head may see scope to conclude the easing cycle in 2012 as the committee raises its fundamental assessment for the region.

Businesses in the U.S. may pass on higher costs onto consumers amid the stickiness in core producer prices paired with the pickup in household spending, and an above-forecast print could generate a rebound in the USD as market participants scale back bets for QE3. However, subdued wage growth along with the slowdown in global trade may encourage firms to absorb higher costs, and businesses may keep a lid on consumer prices in an effort to draw domestic demands. In turn, a weaker-than-expected print could reignite speculation for additional monetary support, and we may see the EURUSD continue to recoup the losses from earlier this week as market participants maintain calls for more quantitative easing.

A look at the encompassing structure of the EURUSD sees the pair briefly breaking below the 50% Fibonacci retracement taken form the January 16th advance at 1.3055 before rebounding sharply off trendline support early in the session. Today’s daily chart has now cleared yesterday’s low and high signifying an outside day and may suggest that the euro will continue to melt higher in the interim. Daily resistance comes in to play at the 38.2% retracement at 1.3155, backed by the 100-day moving average at 1.3220. Note that the daily relative strength index seems to have notably rebounded off trendline support with only a break below this support line offering conviction on subsequent shorts. 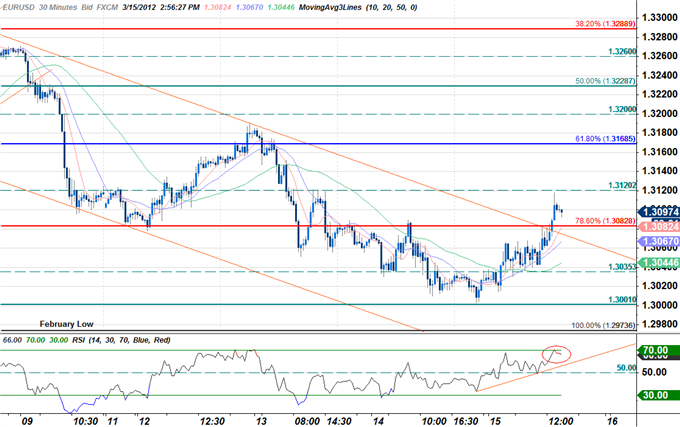 The euro broke above the confluence of channel resistance and the 78.6% Fibonacci retracement taken from the February16th advance at 1.3080 before losing steam just ahead of our soft resistance target at 1.3120. As noted in yesterday’s Scalp Report, we reserve this level as our topside limit with a break above eyeing topside targets at the 61.8% retracement at 1.3170, and 1.32-figure and 1.3230. Interim support now rests with the 78.6% retracement at 1.3080 backed by former trendline resistance, now acting as support. A break back into the previous channel formation alleviates some of the recent pressure on the greenback with such a scenario eyeing subsequent floors at 1.3035, the 1.30-figure, and the February low at 1.2974. Should the print prompt a bullish dollar response look to target downside levels with a break below the February low risking substantial losses for the single currency.

Market participants may overlook the headline reading for inflation as they expect the index to hold steady at 2.9%, but above-forecast print in the core reading could set the stage for a long U.S. dollar trade as the stickiness in price growth dampens expectations for more easing. Therefore, if the core CPI holds at 2.3%, we will need a red, five-minute candle following the release to generate a sell trade on two-lots of EURUSD. Once these conditions are fulfilled, we will set the initial stop at the nearby swing high or a reasonable distance from the entry, and this risk will generate our first target. The second objective will be based on discretion, and we will move the stop on the second lot to cost once the first trade reaches its mark in order to lock-in our profits.

On the other hand, the slowdown in wage growth paired with the weakness in global trade may lead businesses to keep a lid on consumer prices, and a soft inflation report could dampen the appeal of the reserve currency as market participants maintain bets for additional monetary support. As a result, if the CPI weakens from the previous month, we will carry out the same setup for a long euro-dollar trade as the short position mentioned above, just in reverse. 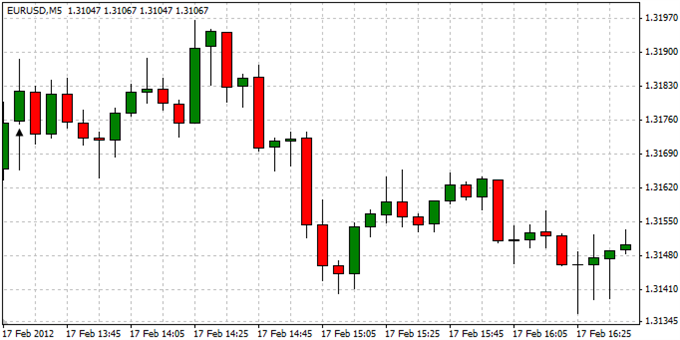 The headline reading for U.S. inflation increased 2.9% in January after expanding 3.0% the month prior, and the stickiness in price growth certainly limits the Fed’s scope to expand monetary policy further as central bank officials expect to see a more robust recovery in 2012. Although the EURUSD tipped higher following the report, we saw the dollar gain ground throughout the North American trade, with the exchange rate ending the session at 1.3141.