- Crude oil prices have snapped their uptrend from the December 2018 low, and in the process have broken through their April low as well.

- Recent changes in trader positioning suggest that oil prices may continue lower in the days ahead.

After initially finding a positive catalyst in supply concerns around Venezuela, the tables have turned on oil prices in the second half of the week amid inventory data out of the United States. Last week, crude oil stockpiles have risen to their highest level since September 2017, while at the same time data showed that US production hit an all-time record high at 12.3 million barrels per day.

While there may have been lingering concerns around the Trump administration’s decision to end waivers for countries importing Iranian oil – part of its strategy to see Iran’s oil exports eliminated altogether – it seems that the US president is already working Gulf allies to prevent undersupply concerns from coming back into the picture. This is an effort to prevent the undersupply threat from pushing oil prices higher ahead of the commuter-heavy summer season (typically the period of the year with the strongest demand for oil and gasoline).

Earlier, US President Donald Trump said he has communicated with Saudi Arabia “and others” about offsetting the supply impact from Iran, noting that “all are in agreement”; per the most recently available data, this would mean that OPEC+ (including Russia) would need to increase their production by 1.4 million barrels per days (not a difficult task). 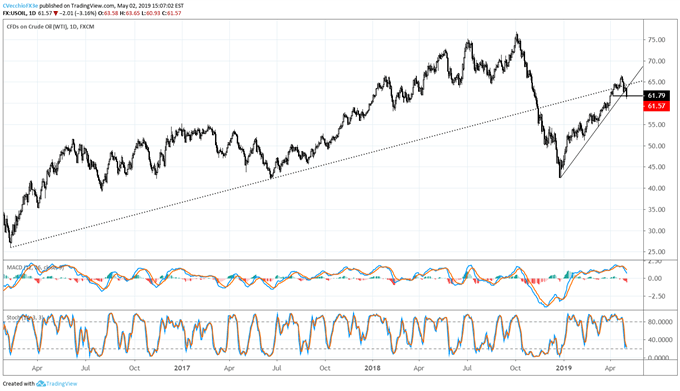 The timing of the supply developments for oil prices couldn’t be worse, as the technical outlook was already on unsteady ground and now critical support appears to be giving way. Earlier this week it was noted that “Failure to continue the rally here would suggest that oversupply concerns may be becoming more prominent on traders’ minds.”

Concerns about oversupply appear to be gaining the upper hand. If so, crude oil prices may be biased lower in the coming days now that price has been rejected on its attempt to get back above the trendline from the February 2016 and June 2017 lows. 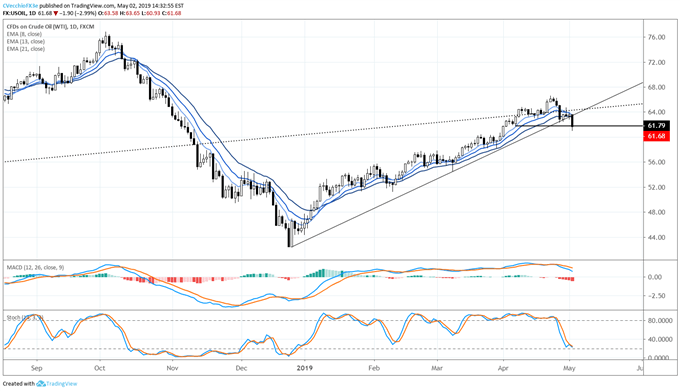 In our last update we said that “failure to rally here could prove to be a technical death knell for oil prices: a move below last week’s low at 62.26 would constitute several key breaks, including: the daily 21-EMA; the uptrend from the December 2018 low; and decisive rejection from the trendline from the February 2016 low. Either way, we’re at a key inflection point in the oil market.” These “several key breaks” did indeed occur, and momentum is now pointed to the downside.

Now, compounding the initial break in oil prices, the April 5 bullish outside engulfing bar low is under pressure at 61.79. A move below this critical level has increased the likelihood of a return to the April monthly low at 60.08. 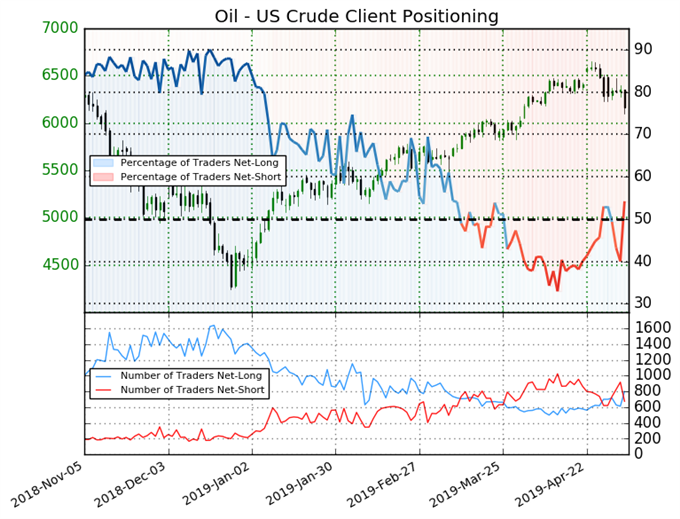 And, per the report from earlier this week, USDCAD’s Failed Breakout Attempt Hinges on Next Crude Oil Price Move, we finally may be finding resolution now that oil prices are attempting a breakdown. 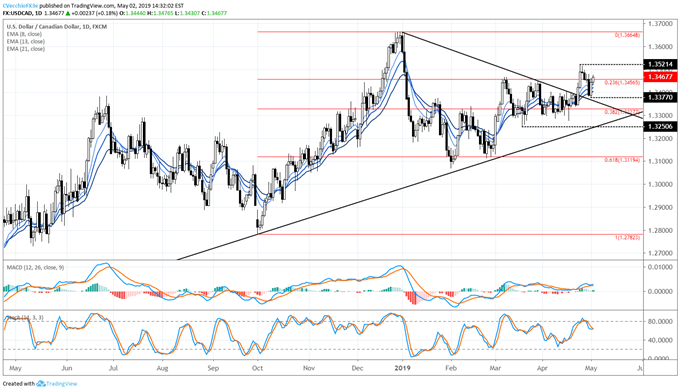 USDCAD price has reversed higher, and it now appears that the recent pullback was simply a retest of former resistance dating back to the yearly high; a symmetrical triangle may have been forming in recent months. Ahead of the US Nonfarm Payrolls report tomorrow, the USDCAD technical outlook has improved in a meaningful way. A retest of the April high at 1.3514 shouldn’t be ruled out in the coming days.